Kettle’s Yard, part of the University of Cambridge, is the venue for a new exhibition of celebrated contemporary artist Ai Weiwei (born 1957, Beijing). Titled ‘The Liberty of Doubt’, the solo show curated by Andrew Nairne explores our perception of authenticity and truth and the value we place upon material things, which is very pertinent for the era of Fake News and disinformation that we are living through.

This is the first time Ai Wewei has exhibited historic Chinese objects alongside his own works.

In the ground floor galleries is an installation featuring 13 artworks by Ai Weiwei, juxtaposed with 14 antiquities which the artist bought at a Cambridge auction in 2020. This is the first time Ai Wewei has exhibited historic Chinese objects alongside his own works. Ai Weiwei has identified some of the antiquities as originating from the Northern Wei dynasty of 386 – 534CE, whilst others are counterfeits – later copies of the original works. The exhibition features an imposing triptych, made unusually of LEGO bricks, which is based on his well-known 1995 series of 3 photographic prints titled ‘Dropping a Han Dynasty Urn’, which show the artist in the act of dropping a valuable 2,000-year-old ceremonial Chinese urn, letting it smash into pieces at his feet.

‘Dropping a Han Dynasty Urn’ incorporates what Ai has referred to as a ‘cultural readymade’ and was very controversial at the time, for the artefact had considerable monetary value as well as symbolic and cultural worth. The Han dynasty (206 BCE–220 CE) was considered a defining period in the history of Chinese civilisation, and by intentionally breaking an iconic urn from that period, Ai began to use antique readymade objects in his artistic practice to demonstrate his questioning attitude towards how cultural values are created and who creates them. 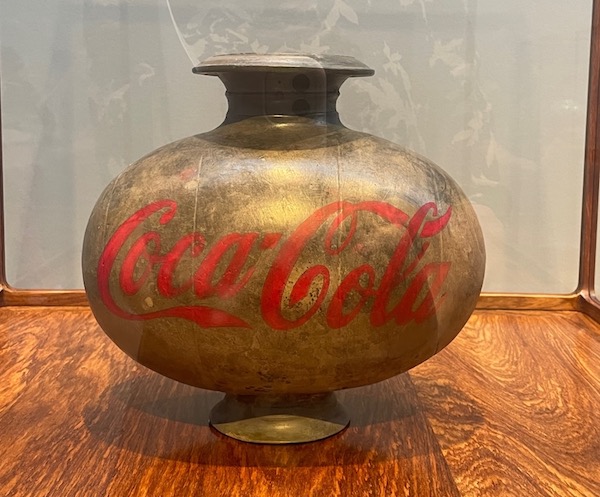 In the Kettle’s Yard exhibition, Ai Weiwei’s own works are beautifully crafted in porcelain, marble and jade and reflect his own life story as well as examining contemporary issues. Featured in the second room of the exhibition are Han Dynasty Urn with Coca Cola Logo (2014), which is exhibited alongside a similar vessel from the Han Dynasty (Chinese painted Han Dynasty pottery graduated ‘cocoon’ vase) as a comment by the artist on the interplay between the traditional and the modern. And ‘Surveillance Camera with Plinth’ (2014) is an exact replica of the lamp posts common during the Northern Qi Dynasty, around 560CE).

Marble Takeout Box (2015) and Marble Toilet Paper (2020) allude to globalisation and the Covid-19 pandemic, while Marble Helmet (2015) recreates a worker’s hat – the kind worn by the rescue team of the Sichuan Earthquake in 2008, and iPhone Cutout (2015) refers to the contemporary worship of material objects such as the iPhone, juxtaposed with Buddhist statues which would have been revered in the past.

In ‘The Liberty of Doubt’ Ai reflects upon the freedom that we enjoy in the West, in relation to the restricted civil liberties of China and other authoritarian regimes, and the art exhibited, as with all his art, encourages us to question perceived notions of truth and authority, and to seek transparency with regard to political matters.

Artist and Activist Ai Weiwei was born in Beijing in 1957, and his childhood was not an easy one – his father, the poet Ai Qing, was persecuted by the Chinese Communist government and exiled to a far Western province. After the death of Mao Zedong in 1976, Ai Qing was hailed as a great national poet. Ai moved to New York in 1981 to study visual art and discovered Marcel Duchamp’s “readymades”, found objects of everyday use that Duchamp elevated to the status of artistic objects, later incorporating the concept of readymades into his own artistic practice, which critiqued our cultural value systems.

In 2011 Ai was imprisoned by the Chinese government for 81 days in a room of only 3.6 by 7.2 meters, a period of incarceration which featured extreme surveillance. Subsequently, his work often alludes to surveillance and censorship, such as ‘Surveillance Camera with Plinth’ (2014), featured in the Kettle’s Yard exhibition.

On the second floor of the Kettle’s Yard exhibition, visitors can watch three of Ai Weiwei’s documentary films; Coronation (2020), Cockroach (2020) and Human Flow (2017). These films examine contemporary topics such as the Covid-19 pandemic, the student protests in Hong Kong and the global migration crisis. As well as the exhibition in the galleries, two of Ai Weiwei’s Fairytale Chairs (2007) has been positioned in the Kettle’s Yard House for visitors to use.

A film on the 2nd floor of the exhibition explains the metaphor between communism that when sunflowers grow, they grow towards the sun – in the same way in communism, the population of china looked up to the all-powerful Chairman Mao. Depictions of Mao often included sunflowers to emphasise the idea that his almighty power was on a par with that of the suns. Sunflower seeds represented the common people who idolised Mao.

I remember the first time I encountered Weiwei’s work at the 2010 Tate Modern Turbine hall installation featuring millions of hand-crafted porcelain sunflower Sunflower Seeds. At the time, I didn’t realise the significance of the sunflower seed. The installation was called ‘1-125,000,000 2010’ and featured a bed of ceramic sunflower seeds installed across the floor of the Turbine Hall to form a vast rectangular field.

When speaking about his inspiration for the Tate Modern installation, Ai explained that sunflowers and their seeds are representative of the Cultural Revolution since “the sunflower faces the trajectory of the red sun, so much the masses feel towards their leadership” (Ai Weiwei 2010). Sunflower seeds supported the political revolution spiritually, as well as materially, as they are traditionally a common street snack in China.

Words and photos by Lee Sharrock

Ai Weiwei ‘The Liberty of Doubt’ is at Kettle’s Yard, the University of Cambridge until 19th June 2022