At Bruce Nauman’s first MoMA retrospective in 1995, the art critic Robert Hughes said “no show was ever noisier…” but concluded that Nauman was “beyond much dispute, the most influential artist of his generation.” Numerous retrospectives followed. “Bruce Nauman: Disappearing Acts” (2018) at the Shlanger Museum, Basel, set to a quieter choreography by Kathy Halbreich, focused on his wistful exploration of the human condition. Now opening at the Pirelli HangarBicocca, Milan, is “Neons Corridors Rooms” a site specific retrospective of 30 works that showcase the most innovative dimension of Nauman’s practice: experiments in space, light and sound. Outlining the early stages and subsequent development of these works, including the first Performance Corridor (1969), this exhibition presents a variety of different corridors or rooms, punctuated by his cheeky neons.

Curated by Roberta Tenconi and Vincente Todoli, with Andrea Lissoni, Nicholas Serota, Leontine Coelewij, Martin van Niewenhuyzen, Katy Wan and countless assistant curators from Pirelli HangarBiocca, Stedelijk Museum, and Tate Modern, London, (where this show originated) it feels like the whole art world has converged on a legacy.  Everyone is here, except Nauman, who is conspicuous by his absence. His voice is here, Get Out of My Mind, Get Out of This Room (1968), and there in False Silence (1975), and his words throb in neon One Hundred Live and Die (1984), Run from Fear, Fun from Rear (1972), but his silence about the show acts like a vortex we rush to fill with our many words. 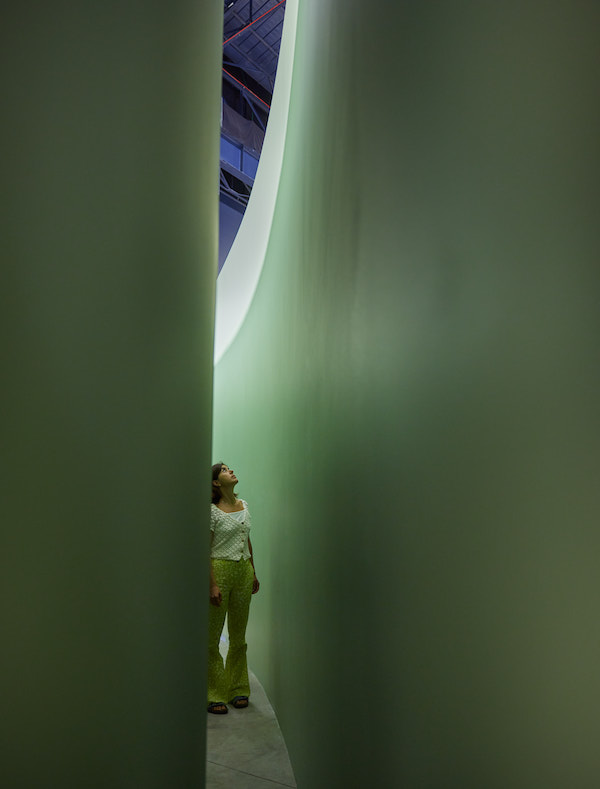 “Because of his celebration of the two faced truth,” Charline von Heyl said in her Artists on Artists lecture for DIA Beacon “there cannot be anything said against Bruce Nauman, that hasn’t also been said in his favour.” Paradoxical by nature, his works hold space for constant revision, and have become the site for an ongoing curatorial conversation between some of the greatest thinkers in the art world. His corridors and rooms invite us to relinquish the safety of the familiar and offer us the chance to step into that strange, uncomfortable place of creative production. They show us how unreliable our sense of time is, or how slippery language can be when trying to pin down a concept. They also capture the impenetrable silence of a creative imperative; the way our mind replays a phrase that no-one else can hear, which is nonetheless a call to action. He has influenced generations of artists, he is also still alive.

Nauman is a restlessly inventive artist. Since the late 1960s he has pushed the boundaries of what an artwork can be, and tested the conditions of its production. Employing an increasingly complex range of materials, his ground-breaking works were designed to manipulate, record and test the viewer’s experience and movements within a space. For Nauman, both making and looking at art involve “doing things that you don’t particularly want to do, putting yourself in unfamiliar situations, following resistances to find out why you’re resisting.”

One might imagine a retrospective to be such a situation, but Nauman has always revised his own work, spiralling obsessively around themes such as our perception of time, memory, and the studio as a site of production. As if to acknowledge this, the curators have not designed this show chronologically; instead it flips between decades, and flops between series, to amplify the ideas that have shaped his practice. They do not pretend this is a definitive reading of his work, as long time friend and curator Nicholas Serota stated at the opening “we will always need to find new ways into Bruce Nauman’s head”.

Why? Well, for a start, it is just so compelling. There is a kind of ‘I dare you’ imperative in the works. Step inside and you are confronted with your own limitations. The experience is not visual, it is visceral: emotions are triggered, your state of awareness heightened. Stepping out again is not unlike waking from a dream, you know it happened – it felt real – but it was not this reality. You cannot go back, even if you want to.

This exhibition plays with this idea from the outset. It starts in the middle, with Dream Passage with Four Corridors, 1984, a work that literally crucifies the idea of traditional sculpture, as something knowable, and perceived from the outside. Enticed by the sunny glow of yellow and red neons, we enter one of four corridors in a crossed shaped plan. At its centre, blocking access to the other corridors, is the mirrored image of a table and chairs. Disorientating and claustrophobic, we are both powerless in the dream and frustrated by the passage. The experience is unforgettable, and it sets up a flashback for the viewer, one that touches on a central Nauman dilemma: there are infinite ways to explore an idea, but we can never go back into an experience. We are both haunted and locked out of our dreams.

Placed next to this is one of Nauman’s most iconic neons, The True Artist Helps the World be Revealing Mystic Truths, (1967), a spiralling statement that is both true and not true at the same time. Absurd yes, but also – given the number of institutions dedicated to showing the work – deeply serious. Two years later, Susan Sontag would give us a definition of spirituality in her essay,  The Aesthetics of Silence, (from Styles of Radical Will): ‘Spirituality = plans, terminologies, ideas of deportment aimed at resolving the painful structural contradictions inherent in the human situation, at the completion of human consciousness, at transcendence.’ It gives us an idea of the moment Nauman started making art, ‘the modern era,’ in which ‘one of the most active metaphors for the spiritual project is “art.” ’ For Nauman however, who began his studies as a mathematician, art was more like a great, unknowable experiment that requires constant revision.

These corridors are more like cavities, or mazes, constructed to limit freedom of movement and contradict expectations. We experience claustrophobia, strain to hear muffled, paranoid thoughts, and glimpse movement through peripheral gaps. Someone is observing our reactions, as if we were rats in an experiment. Nauman’s corridors create the conditions for certain states of mind, which seem tethered to the anxiety of the creative production, and the imperative of having an idea – an original idea – powerful enough to enlist the artist in the strange task of form creation. They capture the absurdity of this project, which is both deeply private and yet totally dependent on being seen and appreciated (understood?) by someone else. 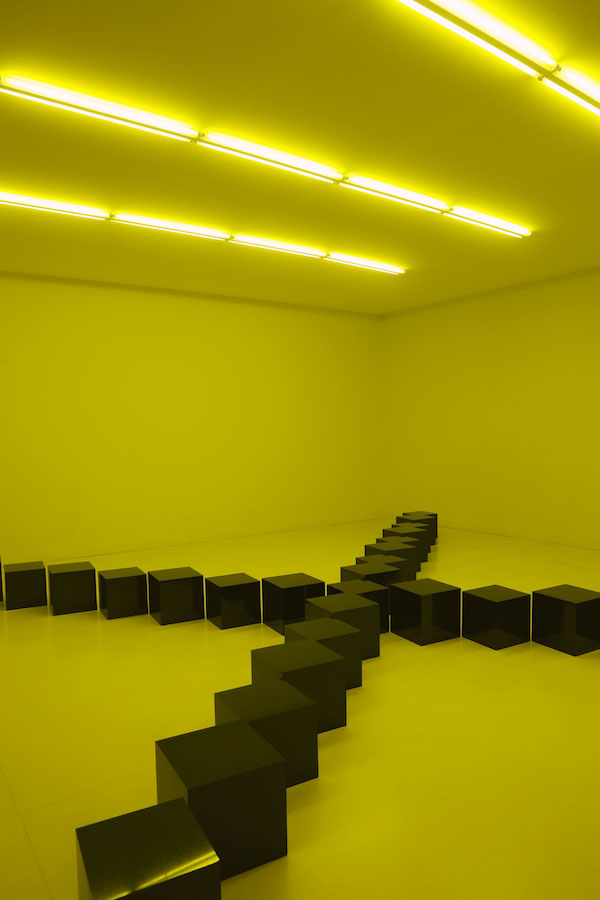 Inside his work, I understand something: at the heart of artistic production, is a kind of voyeurism. “Probing relentlessly into the darker aspects of American life,” said Calvin Tomkins in the New Yorker, in 2009 after Nauman won the Golden Lion at the Venice Biennale, “Nauman helped to break the grip of Minimal Art.” Nauman does not ask us to pay attention, he forces us. But if we submit to the physical conditions of his work, we are offered a way out, and – in the case of the Green Corridor – a reward. A moment of sheer transcendence. I will never forget the sensational magenta afterglow upon stepping out of that restrictive neon green tunnel. It was worth it.

Interestingly, this highly emotive work is of the protagonists in the story of how Bruce Nauman came to be so highly regarded by curators and institutions world wide. In 1971, the Hayward Gallery staged 11 Los Angeles Artists curated by Maurice Tuchman and Jane Livingston. Nicholas Serota, then a young exhibition organiser with the Arts Council, assisted with the exhibition by installing this work. It made a lasting impression. Now owned by The Guggenheim (custodians to the largest selection of Nauman corridors), this work is an interrogation of perception itself. As Nancy Spector says, “The viewer’s encounter with his or her body and mind in relation to the art object – can be interpreted as the subject matter of Nauman’s work.”

An image forms in my mind of Nauman sitting on the floor of his empty studio, waiting for an idea. Like a scene from Beckett’s Waiting for Godot, this somethingmay or may not matter in the end. Over this image another image forms of a child being sent to their room. I hear the words ‘Go To Your Room!’ I asked one of the curators if something happened to Nauman as a child. There is no known event to speak of. One of three boys, Nauman’s father was an electrical engineer, and they moved house often. New rooms, and old rooms.

I enter the next work – an empty room with a bare lightbulb – a Nauman’s recorded voice tells me to “get out, get out of my head”. It is the opposite of an artist talking about their work. There is no show statement, or postscript, nothing tangible about this near mythical character who lives out west and prefers the company of horses to humans. Looking around at the works looming out of the vast darkness in the Pirelli HangarBicocca, I recall the title of his previous retrospective “How to Disappear”.

In her essay (The Aesthetics of Silence) Sontag talks about silence as ‘the artist’s ultimate other-worldly gesture: by silence, he frees himself from servile bondage to the world.’ Nauman has both disappeared and is fully present throughout the exhibition, talking in muffled anxious tones or spelling out tautologies and phrases in neon lights. Throughout this show, we see Nauman explore the paradoxical nature of artistic production, one that requires so much inward contemplation – time spent alone in the studio – but is also conditional on institutional approval in order to survive. A lifetime of critical examination, who can stand up to this? Serota believes Nauman does because “his works are at once timeless… and complex.”

“What triggered this piece were the mice… I was sitting around the studio being frustrated because I didn’t have any new ideas, and I decided that you just have to work with what you’ve got. What I had was this cat and the mice, and I happened to have a video camera in the studio that had infrared capability. So I set it up and turned it on at night and let it run when I wasn’t there, just to see what I’d get …” (Bruce Nauman: Mapping the Studio I)

Filming his empty studio one hour per night intermittently over a period of four months, Nauman  generated forty-two hours of footage whilst he was sleeping. He then manipulated the images used in Mapping the Studio I, with clownish washes of monochrome colour, to distort time, order and ultimately sense. Across six screens, everything and nothing is happening at the same time, usually just out of sight. Nonchalance is a word that comes to mind, not mystic truths. Both viewer and artist become the mice, trapped in a maze of their own making. This work embodies the fear of missing out and not having another brilliant idea, whilst also mapping a set of conditions that might lead you to one.

Whilst Sontag was not referring to Nauman in her essay, its conclusion seems perfectly in tune with this work:

“Art, itself a form of mystification, endures a succession of crises of demystification; older artistic goals are assailed and, ostensibly, replaced; outworn maps of consciousness are redrawn.

The scene changes to an empty room.”

The show finishes with Raw Materials, 2004, an audio tunnel created from 21 channels which have been fitted externally to the building. Back in the daylight, I am partially aware of what is being said, whilst taking in all the ambient sounds and faded colours of the Italian countryside. It is difficult to concentrate.

Then I hear that sentence again, “Go to your room!” I sit down, and try to write about this show.

To explore this show virtually go to: