It’s time for the annual show of sculpture in Regent’s Park, organised by the Frieze Art Fair, but opening far in advance of the fair itself, and lasting for much longer. Also, it’s free. What’s on view, you see for nothing. Which makes me wish, quite fervently, that it was a more convincing show.

This year’s edition doesn’t really offer much to convince its audience that open-air sculpture has much of a role to play in contemporary culture. The days of massive Henry Moore bronzes looming up in front of you, in both urban and rural settings, seem to be well and truly over. Even the works of Messrs Kapoor and Gormley – both of them conspicuously absent here – seem to be fading into a past when public sculpture had something interesting and succinct to say. 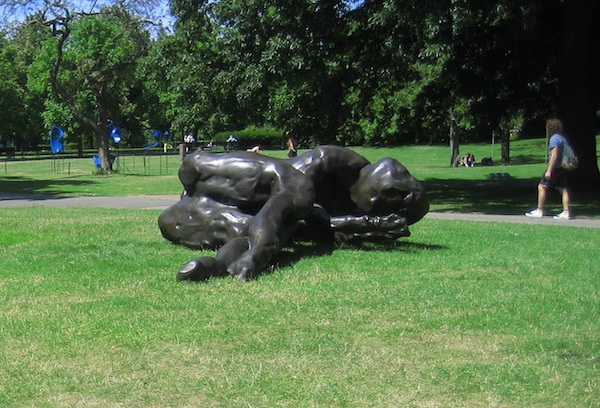 The human figure is only marginally present as a subject for the works on display. Its most conspicuous appearances come in the form of a sprawling bronze female nude by Tracey Emin entitled When I Sleep, and a somewhat worried looking neo-primitive idol by Huma Bhabha. Both works have roots in much earlier art. Emin shows here that she is the daughter of Rodin, but her piece would be twice as good at half the size. Bhabha, who was born in Karachi but who lives and works in America, belongs to the long tradition of Modernist primitivism. Material on the web, illustrating works of Bhabha that are smaller but more interesting than this example, tells one that the artist thinks of her sculptures as “a kind of voodoo construction”. On this occasion, the voodoo doesn’t make much of an effect.

The one giant-sized in-your-face public statement in the show is by the late American Pop artist Robert Indiana: a group of large rust-coloured numerals, each numeral on a separate plinth. The title is ONE through ZERO. An alternative label that comes to mind is “I have nothing to say and I am saying it.” 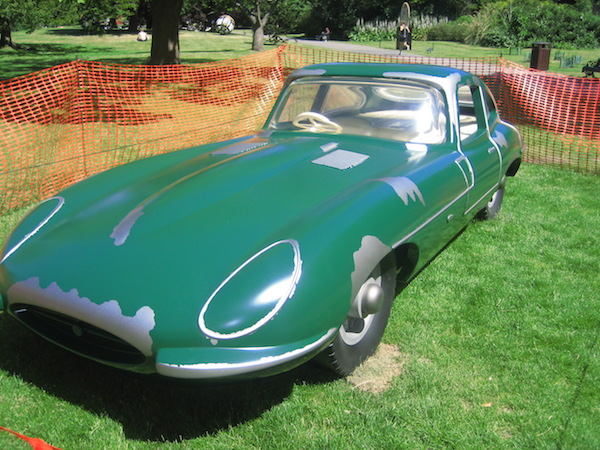 Most of the other artists included in the exhibition are wriggling to get away from the idea that the sculptures they offer need to make any kind of statement at all. An extreme example is a work by Vik Muniz called Mnemonic Vehicle No 2. The work is a toy car, based on a 1970s Jaguar coupe, blown up to full size. Enlarging the toy to this extent emphasises the crudity of the tiny model when compared to the original vehicle. The toy that was the seed of this piece seems, in any case, to have lived a hard life – the paint is scraped. What adds to the ironic effect of the enlarged version, perhaps without intending to do so, is that it is shown surrounded by a wobbly fence made from orange plastic netting. This, presumably, because some real-life children might come along and attempt to climb into the vehicle. This art needs protecting, in a way that most traditional outdoor sculptures don’t. 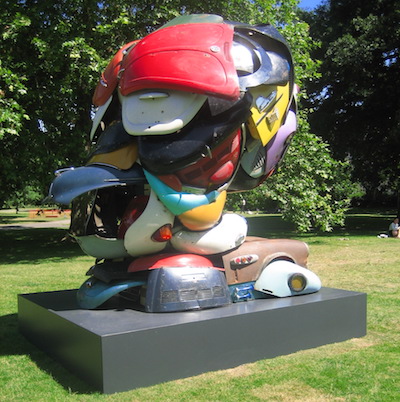 One shared feature of many of the exhibits, however different in appearance they may be from one another, is that you have to be told, in the notices that accompany them, what the artist concerned intended them to signify. They don’t do much to tell you themselves. The artists adopt popular materials – Zak Ove. for instance, offers a form made up from parts of scrapped vehicles heaped together. It belongs to contemporary art’s long tradition of using bits of industrial detritus, things that industry itself no longer has a use for. It is called Autonomous Morris. But then, so what? Or else one is offered inertly familiar shapes. Joanna Rajkowska offers a giant egg. It is called The Hatching, but there is no indication that anything is trying to break out of it. This numbness seems to be characteristic of much Post-Modern public sculpture, of the kind blessed by the contemporary art establishment. Nowadays, where public utterances are concerned, urban graffiti by anonymous hands do a much better job.