Re-enchantment, magnification and framing; are some of the approaches utilised in three shows which demonstrate the diversity and vitality of the contemporary art world.

Les Lalanne, the late French wife and husband artistic duo, are the dreamers who re-enchant. As homage to their aesthetic and as a kitsch comment on their now elevated status, for one half of this extensive survey of their work at Ben Brown Fine Art and Claridge’s ArtSpace, the work is set within the cotton-wool clouds of heaven.

François-Xavier and Claude worked separately, although exhibiting together, and, while sharing aims and approaches, their work differs while complementing one to the other. Both drew ingenious inspiration from nature in order, by magnifying and enhancing, to create fantastic enchantments. François-Xavier focused on the animal world, working with an angular gravity of form, while Claude’s work was more ethereal and sinuous in its focus on flora and fauna. Both magnified forms used natural forms for furniture and combined elements from different forms to create new, fantastical forms, such as Claude’s surreal Choupatte. The development of this signature piece came as Claude had taken a mould of a cabbage and idly wondered what it would look like with chicken legs. Having combined them, she found that the combination had emotion. There are four versions of Choupatte in the show, including a towering 180cm sculpture on the pavement outside.

The exhibition also features Claude’s never previously displayed Lit Hibou et 2 Tables de Chevet – a bespoke bed and two side tables commissioned for a collector – and François-Xavier’s cleverly functional Hippopotame II (Bar), which opens to reveal a full and fully functioning bar. Their works consistently blur the line between functional design, fine art and decorative arts. A flock of Lalanne sheep, ‘moutons de laine’ – a series first exhibited in Paris in 1966 – reflects François-Xavier’s desire to bring country life to Paris while also mocking the herd mentality of the bourgeoisie. Les Lalannes’ characteristic wit is also to the fore in the other works shown, which showcase all aspects of their oeuvre and include Claude’s fanciful ginkgo tables and chairs, flora-adorned mirrors, electroplated copper and bronze chandeliers, candelabra and lanterns, plus a fantastical bronze bestiary from François-Xavier including a pair of wild boars, a monumental standing bear and a wild horned goat. Their ethic was to create dreams – Claude said: “I dream when I am awake. There is nothing left over by night” – and the decision of the curators to show their work in a dream-like space honours that ethos. 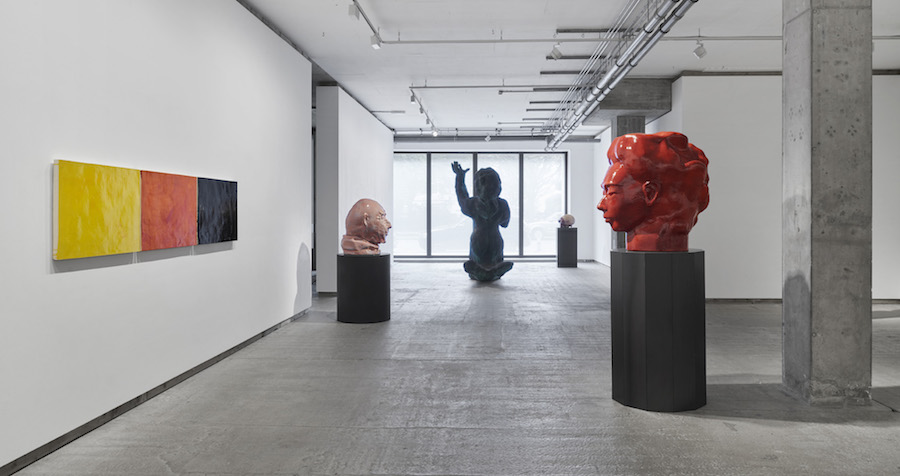 Magnification is also an essential strategy for Thomas Schütte, as demonstrated by the grandiose figures and heads in his exhibition at Frith Street Gallery. This show begins with the monumental Nixe, an enormous bronze mermaid whose upwardly-reaching form is optimistically gazing into the sky. The remainder of the works divide between ceramics and glass. Großer Frauenkopf (Rot) is a huge ceramic female head glazed in a blazing red which, through closed eyes and interior calm, conveys a sphinx-like mystery. The recumbent glass heads You 24 and Me 24 and the ceramic Frauenkopf (implodiert) are figures in calm repose, with a peaceful yet melancholy presence.

Less serene are Experte O and the busts in Old Friends Revisited. Experte O – from a series of busts of larger-than-life males that are reminiscent of historical busts of politicians or military leaders – glares into space with a nervous intensity which undermines the authority initially suggested by his size and scale. The Old Friends series dates back to 1992 when Schütte created his United Enemies and Innocenti series of heads to reflect the political tumult of the time. As the present era continues to make manifest, the absurd figure of masculine authority remains perennially relevant, enabling Schütte to continue to revisit the series. The coloured glazes of the Old Friends Revisited imbue these heads with a florid appearance contradicting any sense of authority that might again be suggested through their scale.

A further longstanding motif for Schütte has been the ‘doppelkopf’, or ‘double head’, which evokes Janus, the Roman god of portals and transitions who embodies in-between or liminal states. Dopplekopf (Blau) looks outwards and inwards simultaneously as one visage stares into space. At the same time, the other has its eyes closed ­­– a single figure combining male and female inhabiting the world as both a witness and a thinker.

Andreas Gursky is both thinker and witness. His new and recent photographs, produced over the past four years, reflect his focus on the ‘essential commonality’ of contemporary life and the forms and structures of global capitalism. His subjects range from multinational headquarters to fashion runways, a domestic interior to a political seminar and, like Schütte, he has revisited some earlier work, including photographs of sites such as the Hong Kong Shanghai Bank and the Rhine River.

Looking to identify the organising principles within landscapes and cityscapes, Gursky’s photographs are framed to focus on the shapes and patterns of human activity, organisation, and society. They are simultaneously documentary and abstract images because they capture our patterns of human activity or impact. Rhein III and Salinas are horizontal banded colour field compositions which can be viewed both as abstract patterns and as landscapes showing the impact of human industry. Rhein III depicts the Rhine depleted compared with the earlier Rhein II, with bleached dry banks and low water levels following the severe summer drought of 2018. The contrast suggests the impact of climate change on this landscape. Salinas appears to be a conventionally beautiful landscape at dusk, yet its horizontal patterning reflects nature as an industry site through the extraction and trade of salt in Ibiza. Both are images devoid of human beings yet are hugely impacted by human activity.

Kreuzfahrt (Cruise), Hong Kong Shanghai Bank II and III repeat the horizontal banded compositional format that can be viewed as an abstract pattern concerning human constructions, whether ship or screens. In the last of these, repeating umbrellas allude to Hong Kong’s 2014 ‘umbrella movement’ of anonymous protesters.

Images such as V&R II and III or Eisläufer (ice skater) repeat the trick with people forming patterns. The tight conformity of the fashion industry is revealed in the regularity of its patterns, while the fuller, expansive nature of community is seen in the open patterns formed by winter crowds skating by the Rhine in Dusseldorf. A und E gives us a pattern of community and unity in an image of two, being mother and baby, while Königsbergerstrasse returns us to the surreal with a two-part lockdown image of a cardboard box wearing woman building an amazing complex and tall block-built tower.

Framing is key to the dual operation of Gursky’s images, enabling them to function as both astute social comment and painterly compositions. Social commentary and critique are shared strands running through these otherwise very different exhibitions. We are all richer for the diversity of approaches and work to be found here.