Returning to New York on Air Fair Weekend, I missed Independent, the Armory and Spring Break while nursing an airplane cold (luckily, not covid). However, as I recuperated, I visited several local downtown galleries, abounding with great autumnal energy.

I began with a clothing and supplies delivery to Tribeca. I was thrilled when P.P.O.W. sent out an e-blast requesting much-needed donations for the recently arrived asylum seekers shipped from Texas to New York by the vile Governor Greg Abbott. P.P.O.W.’s well-organized drive resulted in neat piles of necessary and much-needed supplies. And there was performance legend, Martha Wilson, helping out! Kudos to Wendy Olsoff and Penny Pilkington for creating an opportunity to help in this humanitarian crisis. 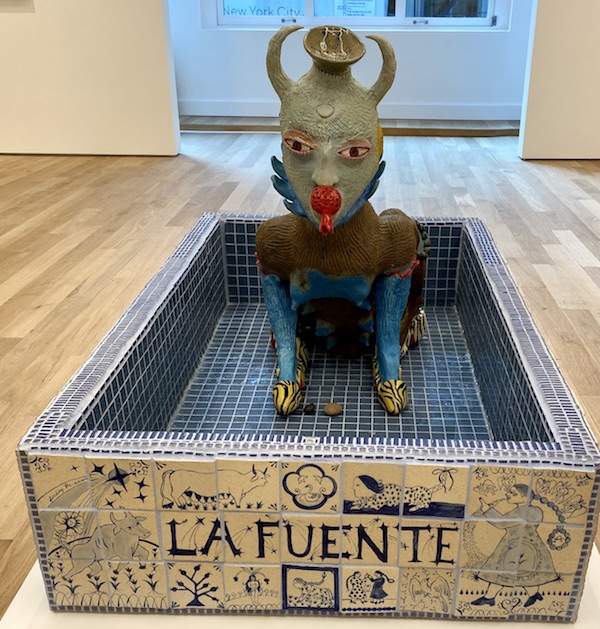 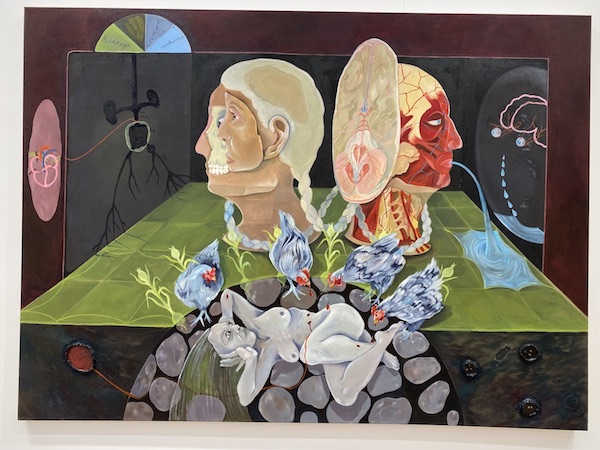 Downstairs, an equally intriguing show’ Staircase to the Rose Window,” introduces another debut show for Chiffon Thomas. The interdisciplinary artist explores “impossible bodies” with sculptures, which begin with Nevelson-influenced stair spindles and transmute to trippy creations made of torched tweed fabrics, chalk, pastel, embroidery thread and reconfigured iron grates. I loved the last room, the 19-part “Etheric Plane,” where threaded and sewn bible skins create a flotilla of miniature domiciles. A close-up reveals a house built of bibles, where windows open to limitless possibilities. 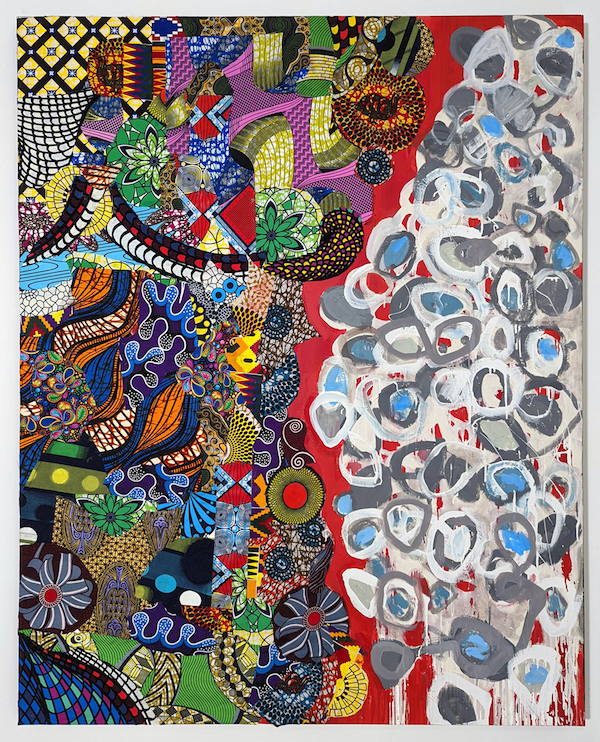 Danny Simmons “The Long and Short Of It” at Westwood Gallery

Artist, poet, activist and collector Danny Simmons was a stalwart presence in N.Y.C. before his move to Philadelphia. With his brothers, he co-founded Rush Arts Gallery in 1995, which has served as a vital cultural hub nurturing young artists in New York and now Philadelphia.
The self-taught Simmon’s current show of paintings works on paper and fabric assemblages reflects his long exploration of Neo-African Abstract Expressionism and the influence of his vast collection of African art. Oil and fabric work like “The Red Road” melds traditional African fabric, like Ghanian kente cloth, precisely cut in geometric shapes adjacent with loopy modernist and masterful markings. The results are kinetic and kaleidoscopic. The latest works from these last stressful years are jazzy syncopations of the vivid palette and magnetically magical pointillism.

Nina Yankowitz “Can Women Have One Man Shows?” at Eric Firestone

As a young woman, Nina Yankowitz created unstretched, draped, sewn and pleated paintings, which cascade in calming folds. A subsequent New York Times review categorized the work as “fancifully draped, somewhat feminine” and was promptly answered in rebuttal by feminist critic Cindy Nesmer’s vociferous objection to his “coy language.” The title of Nemser’s review was “Can Women Have One Man Shows?” Yankowitz’s draped paintings were seen in the 1973 inaugural Whitney Biennia, during the same period of time that Yankowitz became a founding member of the influential and revolutionary women’s collective “Heresies.”
This current show features fifteen of these works created in the late sixties and early seventies. The muted but rich palette and weighty folds demand that the viewer slows down as the fabric seems almost to breathe, sweeping with a swath of unexplained gravity.
Fifty years later, these works are recognized as a celebration of feminist art practices, sewing, pleating, and using colour as saturation while expanding the boundaries of conventional painting. Yankowitz’s long productive career has led to museums and international exhibitions. Working in new media technology, Yankowitz creates interactive public works and installation art, including the beautiful glass “Cloud House,” an aluminium and tempered glass house generating a changing water vapour cloud. 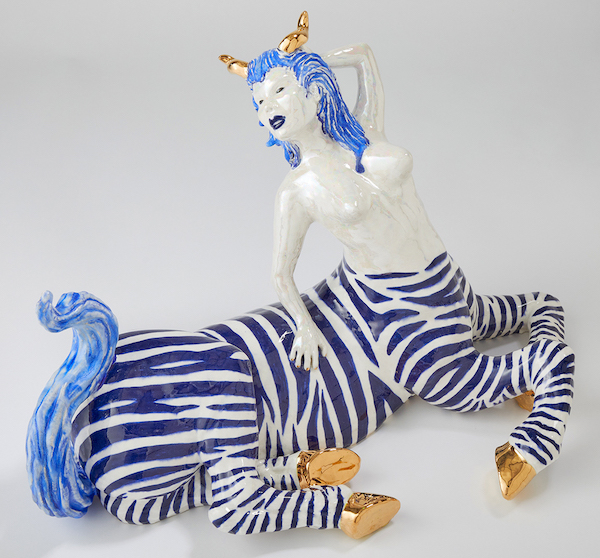 Roxanne Jackson “Nature Is A Whore; A Comedy and A Tragedy” The Hole

This wonderfully weird sculptural ceramics show centres on the classical amphora vase, now elevated and embellished with climbing creatures, chicken feet, chains, fungus and a proudly profiled cockatoo. Multilayered use of brilliant glazes creates glowing swathes of uninterrupted colour. The show can be viewed as Meissen energized by acid, a psychedelic cornucopia.
“Connie the Centaur” is an appealing amalgamation of a zebra centaur with a horned woman.
In a provocative pin-up pose. The identical poetic personification births a proudly profiled “Unicorn” and an undulating and unapologetic “Snake Lady” with a mesmerizing gaze.
Clay, perhaps humanity’s oldest handicraft, is having a moment now, with several galleries highlighting new explorations of the ancient medium. Jackson’s gorgeous grand collection is a prime example of a cool contemporary reinvention of glazed and fired earth. 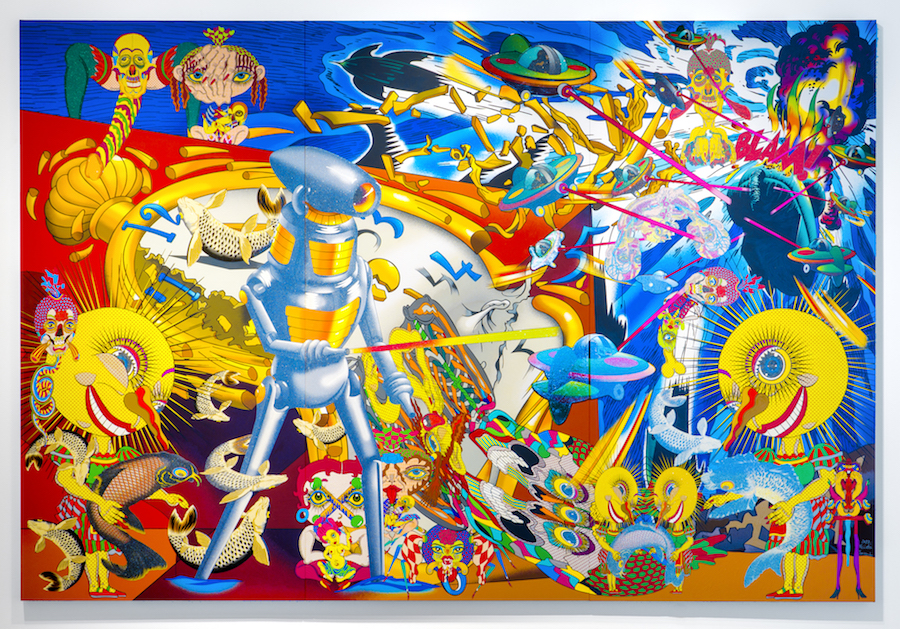 Born in 1936, this Japanese artist has long incorporated Western pop imagery as an influence in his long and storied career. However, Tanaami’s work transcends any medium and infuses his work with movement and dense countercultural references with co-mingling manga, Neo Dadaism, and traditional Japanese techniques.
This show includes small works, the daily paintings the artist executes, inspired by Picasso. The monumental canvases created especially for this show highlight the artist’s dizzying best, as he commingles glitter, crushed glass, silkscreen and ink markings in his opulently layered imagery. An opened eye is at the centre of a mandala, with flying saucers, superheroes, cartoon figures, and cute monstrosities. This octogenarian artist maintains a vision as explosively energetic as back in the day when he created album covers for the Jefferson Airplane.