In a letter to his brother Theo, Vincent Van Gogh wrote, ‘I’d like to paint men or women with that je ne sais quoi of the eternal, of which the halo used to be the symbol, and which we try to achieve through the radiance itself, through the vibrancy of our colourations.’

Van Gogh’s self-portraits have often been (mis)interpreted in terms of his troubled life story instead of paying attention to what he says about them in his letters. Van Gogh. Self-Portraits reconsider this aspect of his work and place his self-representation in context to reveal the role it plays in his oeuvre. Amazingly, this is the first time that the entire span of Van Gogh’s self-portraiture has been explored in an exhibition; all the way from his early Self-Portrait with a Dark Felt Hat, created in 1886 during his formative period in Paris, to Self-Portrait with a Palette, painted at the asylum in Saint-Rémy-de-Provence in September 1889, one of his last self-portraits before his death in 1890. What we find is the radiance of the eternal in the vibrancy of colour. 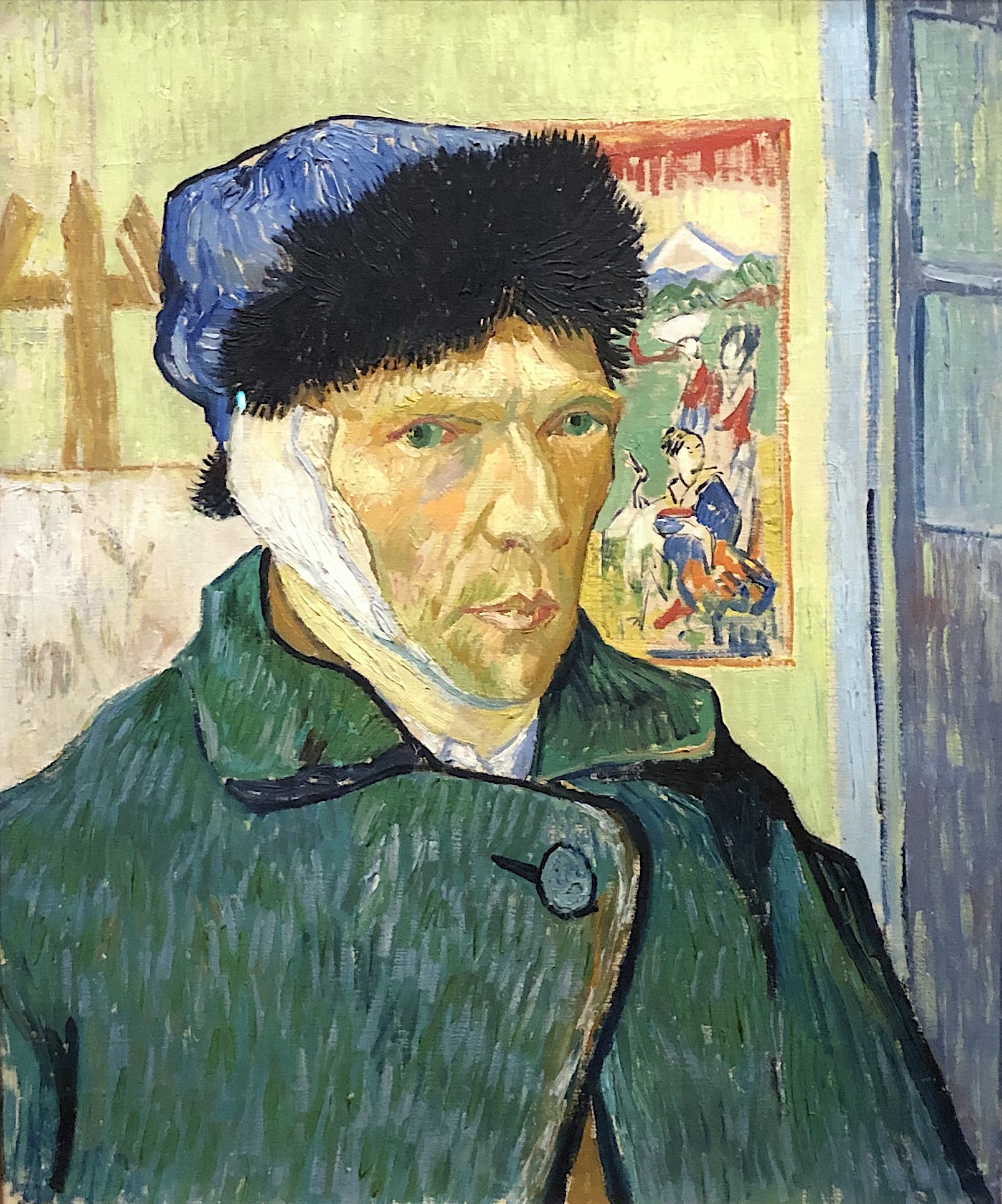 Van Gogh’s work moves from the darkness of his first great work, The Potato Eaters or, here, Self-Portrait with Felt Hat through the brightening of his palette as a result of growing confidence in using colour, gained initially through his deep interest in Impressionist and neo-Impressionist art. The beginning of this change can be seen here with the Self-Portrait of 1887, which has been cleaned in advance of this exhibition, removing the yellow varnish that had obscured its vibrant colours.

This move to colour is accompanied by looser, impasto brush strokes often constructed in circles that mimic or mirror the sun, colour creating illumination. In his work, the sun represents the presence of Christ and the colour yellow implies divine presence. This moves him from the realistic play of light on the face that we see him use effectively in Self-Portrait with Felt Hat to depictions of the light of eternity through colour and pattern. He does this in two different ways. The first is to create halos by means other than gold leaf circles. In a work like Sower with Setting Sun, he positions the yellow sun behind the Sower to create a halo effect, while here, in Self-Portrait with Grey Felt Hat, he uses a background of orange dots laid over long blue strokes to do the same thing.

The second is to create an internal light using bold hatching radiating outwards from the nose to create a circle or halo effect on the face or coming from the face. Again, Self-Portrait with Grey Felt Hat provides an excellent example of this interior light emanating from within. However, its most striking use comes with Self-Portrait 1887. The brushstrokes radiating outwards from the face are almost electric in their force, extending upwards to his hair which literally stands on end and downwards to his smock, which becomes lithe and fluid. Yet it is light, inner light, that exudes from these lit lines of lightening colour. His friend, the artist Émile Bernard, spoke of Van Gogh’s ‘fiery faces’, and there is no better phrase for this effect. All this to depict the radiance of eternity.

The self-portraits Bernard described as being Van Gogh’s ‘fiery faces’ were all exhibited in 1887 at Le Grand Bouillon-Restaurant du Chalet in Montmartre, along with works by Henri Toulouse-Lautrec, Bernard, Louis Anquetin and Arnold Koning. They show Van Gogh at his most experimental with these flecks of colour acting more like a mask covering the face than as a means of representation. 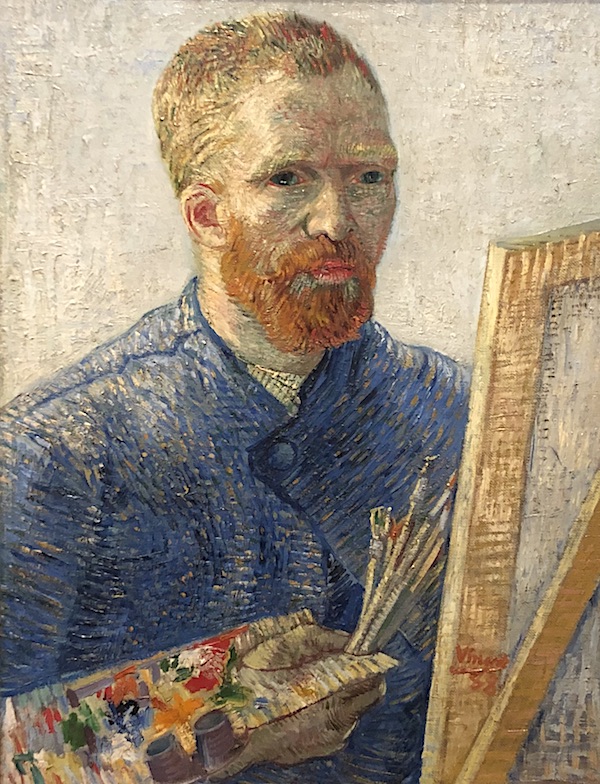 Vincent van Gogh Self Portrait As A Painter 1888

The 16 self-portraits gathered here are around half of those he created during his career, the latter of which, painted at a time when his mental distress was most pronounced, are among the most peaceful and unified of those displayed. Again, demonstrating the extent to which Van Gogh’s life experiences have often been read back into the paintings in ways that conflict with the paintings themselves.

The exhibition also includes Portrait of Eugene Boch and Van Gogh’s Chair. These, though not self-portraits in the conventional sense, are included as images that reveal aspects of Van Gogh’s self-image and as works that were important in fashioning that image. For example, in his portrait of the Belgian painter Boch, Van Gogh seeks to convey his image of an ideal artist, one who ‘dreams great dreams.’ Behind Boch, Van Gogh painted a starry sky – one of his favoured motifs – to suggest ‘the infinite.’ Eugene Boch is, therefore, painted with that ‘je ne sais quoi of the eternal’ about which Van Gogh wrote and is, therefore, a projection of his own artistic identity.

Van Gogh’s Chair, by contrast, is humble and homely; part of his desire to transfigure the ordinary and mundane that is apparent throughout his work from The Potato Eaters – where he sees, in the words of Makoto Fujimura, ‘a sacred, warm light’ – onwards. Painted as a contrasting pair with Gauguin’s Chair, the plainness and modesty of Van Gogh’s Chair expresses his long affinity with the peasants’ way of life and, in this way, aspires to be a symbolic ‘self-portrait.’

These are, as Van Gogh rightly perceived, painted portraits with a ‘life of their own that comes from deep in the soul of the painter.’ Yet, despite the short life and obscure career of this troubled soul, what was deep in the soul of this painter was eternity seen in both the infinite and the ordinary.