Geraldine Swayne is a highly regarded painter known for her intimate portrait and figure paintings in enamel on copper, aluminium and canvas. Her subjects engage in everyday activities – listening to music; sewing; putting on lipstick; drinking. Sometimes they are clothed, and often they are unclothed – sitting, lying, having sex, or being spanked.

I paint atmospheres. The insinuated, unspoken and unspeakable evidence of the human personality – GS

In her upcoming exhibition at Charlie Smith London, Swayne scales up to combine small paintings with larger-scale work. Her subjects are derived from various sources, including 18th-century ceramics; anonymous vintage photographs; a cache of photographs found in a serial killer’s lock-up; and her own iPhone pictures. 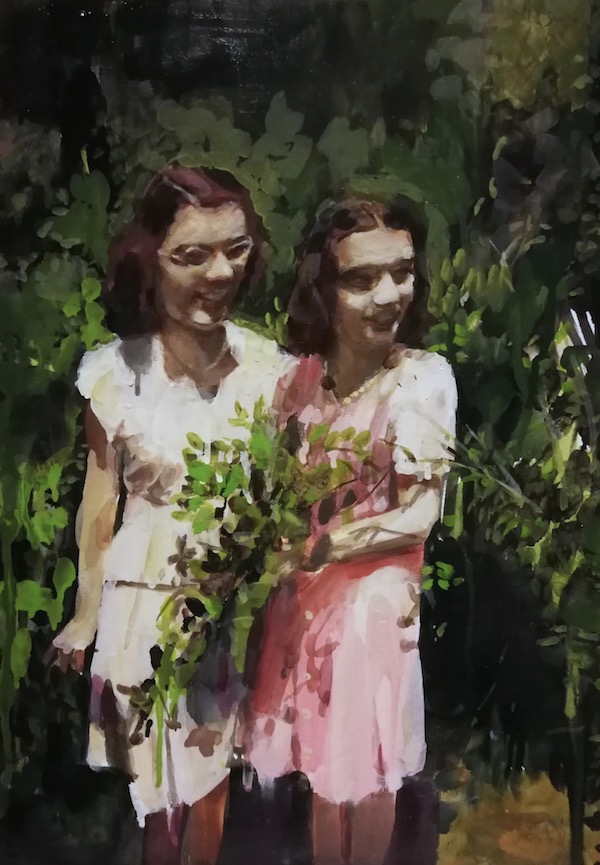 Artlyst) How do you describe your practice?

Geraldine Swayne) I am a traditional painter: brushes, canvas, aluminium, Turps and so forth. I’m a mentor at Turps Art School, which I include as part of my practice because being a peer-led and mutually critical school, there’s always something to learn. I’ve made films, including an ‘IMAX’ experimental short, and numerous things on super-8. I was in a couple of bands: …bender, (2005-2006) and Faust, (2006-2018). I’ve also dabbled feebly in ‘Fluxus’ theatre.

AL) Which artists have been your key influences?

Geraldine Swayne) Degas, Holbein, Kitaij, Dumas, GF Watts, David Octavius Hill and Robert Anderson, Bacon and Jarman. These are the artists that got me in my youth anyway.

AL) If you could own two pieces of art, what would they be and why?

Geraldine Swayne) The Alfred Jewel because it is a perfect, symbolic, abstracted, Anglo-Saxon portrait rendered as treasure. It speaks about the marriage of church and state, aa expression of something that literally owned the souls of its contemporaries. ‘Alfred caused me to be made’ is written around its edges, which for some reason makes me imagine the artist who made it, saying it out loud. It’s beautiful and eerie.

AL) What was the defining moment in your career that led you to figuration and portraiture?

Geraldine Swayne) My father gave me a 90p book of David Octavius Hill and Robert Anderson prints, which completely blew my ten-year-old mind. I still have it, and still refer to it. There was something so mysterious about the faces; I used to stare at it for hours and try and draw from it—something about the past and present telescoping, and wanting to know more about long-gone people.

AL) You work in a wide range of scale from micro-miniature to large can you talk a little about the challenges involved with size, does it matter?

Geraldine Swayne) There was a panel talk at Turps for the ‘Women Can’t Paint’ show, including myself, Rebecca Fortnum and others. Size came up in the debate, inevitably, as it is actually an issue in ‘women’s painting. Rebecca Fortnum was I think accurate when she posited that women painters are often reluctant to take up too much space with their work. This resonates with me. My miniatures, in their making, feel private and without the pressure of a later ‘exposure’ and it frees me from ‘over-producing’ the subject matter. I love small paintings because they are meant for private places and close up scrutiny. Painting small also suits my temperament, which is to work fast and repeatedly on the same passages, but without getting tired. I use enamel for the miniatures which have a fast-drying, cumulative effect which I also like.

For the Charlie Smith show, I wanted to commit to making large paintings about things that are on my mind. There’s definitely a conversation with symbolism and even some Religiosity in the new work—a lot of relating to death. I’m responding to what I think are very dangerous times with some seriousness and without cynicism or tricks; I’m putting myself out there really.

AL) Do you consider yourself a feminist? And if so, how does feminism manifest in your work?

Geraldine Swayne) No, I don’t consider myself a feminist, although I am almost separatist about certain things. As a child, I was aware it was unfair that I was excluded from certain male privileges and I was really competitive about it. Do I owe the 60’s and 70’s definition of feminism a debt? Absolutely, but when I’ve witnessed the term more recently getting cited lazily and used as a shut down in a debate, or to bully co-workers, I cringe, because it re-emphasises women as something ‘other’ and difficult. Women are still chattel in the majority of the world, but the only thing that will change that is freedom from reproduction. So whilst my work is often about marginal or separatist or strange women, it is not ‘feminist’ in what I take to be 2020’s rather vanilla meaning of the word. 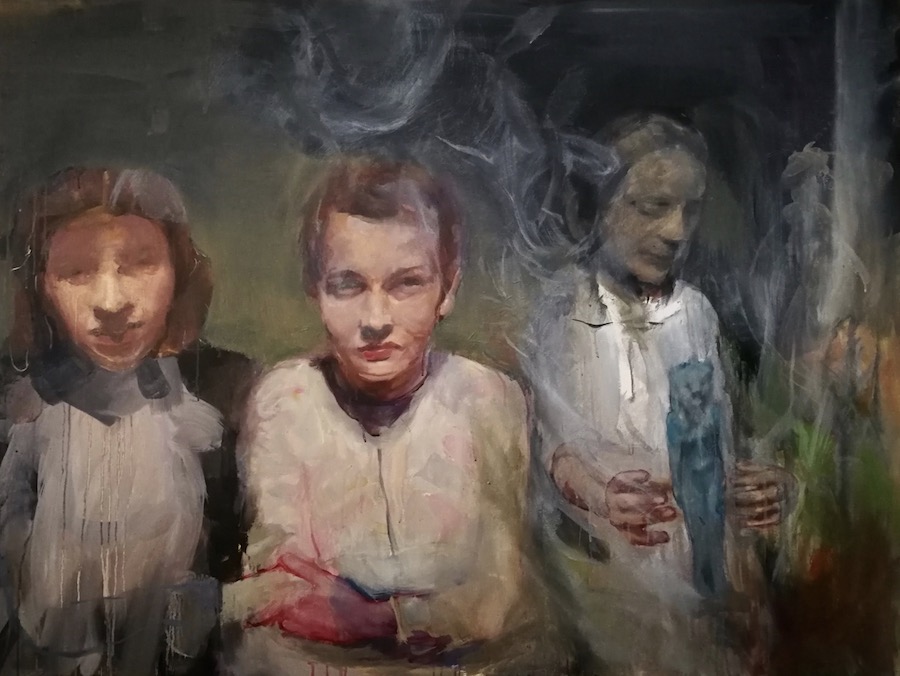 AL) As well as being a respected visual artist, you are also an internationally acclaimed musician and recording artist (‘krautrock’ group ‘Faust’) does your music come out in your painting and vice versa?

GS) The one thing does not come out in the other in an obvious way, despite the fact that I regularly painted large canvases on stage with Faust. Perhaps both practices merge a bit in my lyric writing, which is pretty visual when I come to think of it, but I was making visual art with Faust, it was just of a very different, freer and more instinctive sort than I was making in the paint studio. I was definitely using different bits of my brain in both practices, and it was quite challenging to switch gears back into painting mode after a few weeks away touring. There was almost a physical feeling of the brain rewiring. I did learn a lot from Faust about letting go of all ego and allowing things to just ‘be’, so perhaps that has influenced the painting.

AL) Some pretty dark forces drive the contemporary art world, what is your advice to other artists trying to breakthrough?

GS) Here are my aphorisms! Fall in love with something and engage with it, without too much concern as to whether it fits in anywhere because you have to be true to yourself or it’ll never sit right. When you’re doing your thing, it’ll generate its own gravitational force and you’ll be able to keep working, whether it’s fair weather or foul. Stay in the studio, rather then socialising too much, because if you’ve got the work, you can let it do all the talking for you, which is much better than trying to convince someone you are going to make some work one day.

AL) Your upcoming/latest Exhibition at Charlie Smith London 18th Sept-17th October 2020, is titled  Annunciation; can you elaborate on what this spiritual title means to you?

GS) Yes, I am very interested in the unconscious mind, and how it’s occasional messages to the self, (its instinctive intuitions) can be, and often are, interpreted as supernatural or extrinsic to the conscious self; as the recitations of angels for example. It’s similar to the idea of the receptive internal antennae Bacon described to David Sylvester. Whilst I like the idea of receiving supernatural signals and of other consciousness’, Annunciation is really about the death of religion as I’ve known it, and falling in love with the real miracle of cellular life. It’s about misinterpreting information, finding ourselves in peril and rediscovering rationality. I was going to call it Gorgonopsian after an ancestor, (I’m glad I didn’t though).

AL) How has lockdown affected you and your work? 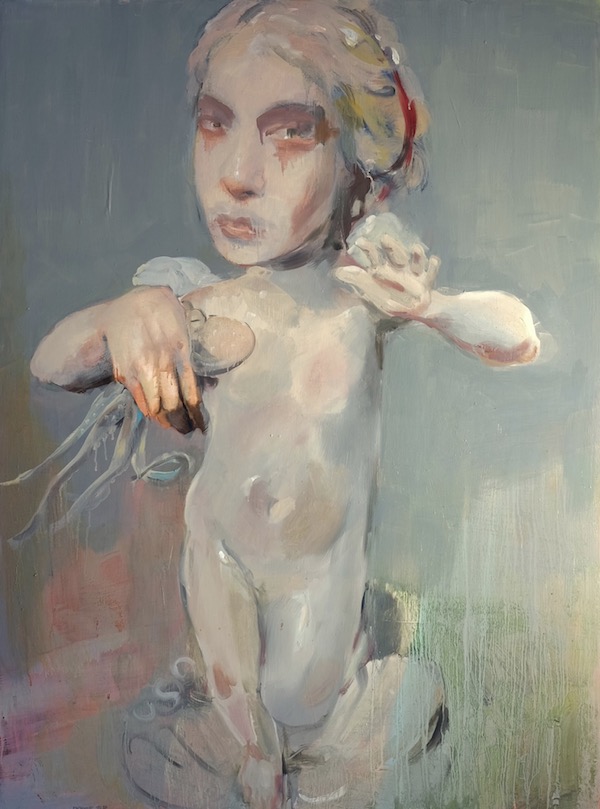 GS) Here we are in the new universe! Well, I’m not sure as yet how my work is being affected, but so far, I feel less inhibited. More curious about material paint and paint effects. I think my concerns have shifted. I care more about what I spend my time doing, since I have been forced to reflect on how little time I have left, and I don’t want to waste any more of it in darkness, or in vain pursuit, if possible. I also realise how much I love the planet, the biosphere, and don’t want to see it die. I have acquired a 2nd studio and so have two practices at the moment; one big one small, (morning and evening), with a beautiful park to walk through midday, so I’ll enjoy it while it lasts.

AL) How has your mental health been through this challenging time?

GS) Like, everyone, it’s been up and down. The quilt making hormone came and went. Then the cleaning hormone; then the DIY hormone. Then queueing for pensioners. Latterly I have been absorbed in trying to vaguely understand quantum physics and find it a great consolation. Essentially there is no fixed future or past, just bendy time and expanding space. Currently, I’m excited about neutrinos going the wrong way and consciousness probably being physical. I’ve stopped drinking too, which feels good at the moment, and the night terrors have diminished, but I hope we get through the winter ok. That’s going to be interesting.

AL) I understand you are going to include some new work painted during the lockdown can you describe how they differ from paintings created pre-COVID?

GS) Yes, there will be a couple of new, large, ‘fast’ paintings made in a period of good flow, so to speak. Big heads, mysterious babies. These entities seem less troubled than the pre-COVID cohort, but rather sterner—odd gods.

AL) Has your new studio made a difference to the scale or palette of your work?

GS) I am mainly using the new studio for smaller work, but that may change. So it hasn’t changed the scale or the palette yet, but it is just such a pleasure to be there! There are chickens with their chicks wandering around, a tame fox, a café and wood yard and blacksmiths. A very magical place. Very good people.

AL) What are your plans (COVID-willing) for the upcoming year?

GS) Hopefully, I will finally get a chance to have my residency at the Moth Retreat in County Cavan, Ireland, which I was awarded to me as part of the 2020 Moth Art Prize. I also hope to restart plans to work with the estate and family of a wonderful printmaker who died last year. I’d like to go to France again. I’d like to write more. We’ll see. I suspect things have changed for good on some level, but I’m pretty wedded to the studio anyway, and that’s not a bad place to be confined from now on….

Geraldine Swayne graduated from Newcastle University in 1989. She won the Northern Arts Travel Award in 1989, going to New Orleans to make paintings and super-8 films; she moved to France where she made portraits and large outdoor paintings for the Marie of St Jean de Fos, Languedoc; became a pioneer digital special-effects designer, working for over a decade at CFC/Framestore in London and Los Angeles; has made numerous experimental films including the world’s first super-8 to Imax film ‘East End’, narrated by Miriam Margolyes with music by Nick Cave. After leaving the film industry in 2004, Geraldine worked as an assistant for Jake and Dinos Chapman rebuilding ‘Hell’ at White Cube. Swayne became a member of seminal ‘krautrock’ group ‘Faust’ with whom she has made various studio albums and tours. Swayne has had solo exhibitions including Aeroplastics, Brussels; Fine Art Society, London; and Fred, London. She has been in group exhibitions including Jerwood, Hastings; Royal Academy of Arts, London; Jerwood Space, London; David Risley, Copenhagen; Magasin3 Museum, Stockholm; and Walker Art Gallery, Liverpool. She won the Dupree Family Award for a female artist at the Royal Academy Summer Exhibition in 2018.