London UK – So many new international galleries seem to be opening in Mayfair that one might get blasé…   but Marian Goodman’s is heroically scaled, and kicks off with a refreshing account of Richter’s recent work: not the auction-friendly strands of scraped abstracts or blurred photo-realism, but…   a seven-pane glass sculpture; eight of the rigorously self-deconstructing photo-derived ‘Strip’ versions of his own painting, the biggest ten metres wide;  nine explorations of the grey monochrome, with oil on board, oil on glass and enamel behind glass showing their different effects;  eleven ‘Flow’ paintings – multi-coloured pools of paint, its movement stilled by being trapped beneath glass; a particularly good set of 17 small oil on photograph works; and four colour-square works, cheekily installed to hint at the even grander space in which Richter has employed the motif in stained glass. This Adjaye-designed gallery isn’t quite Cologne Cathedral, but is closer than most…

Over the past five years Richter has been primarily concerned with a series of paintings premised on systematically deconstructing a photograph of his own abstract oil on canvas from 1990. Revisiting an idea he first employed in his late-seventies project ‘128 Photographs of a Painting’, he divided the work’s surface into two vertical sections, then halved those halves, and so on, subjecting them repeatedly to a premeditated procedure he described simply as ‘dividing, mirroring, repeating’. At the point when this digital process had generated 4,096 infinitesimal vertical sections, Richter intervened with a rigorous selection process, re-imposing his subjective will and choosing particular preferred strips with which to continue working. Following one further final halving and mirroring, he had each work printed to his desired scale, so that we might contemplate what have become remarkable horizontal, rhythmic fields of fine lines, oscillating with vibrations of colour, the largest of which stretches over ten metres, as seen on the gallery’s first floor. By tellingly entitling these unique works ‘Strip’ paintings, Richter is referring not to those lines, but both to the miniscule vertical strips they represent of their source and to the sense of physically ‘stripping’ – taking apart and dismantling his original painting. Of not only reinventing, but wholly paring down and fundamentally abstracting his own abstraction. 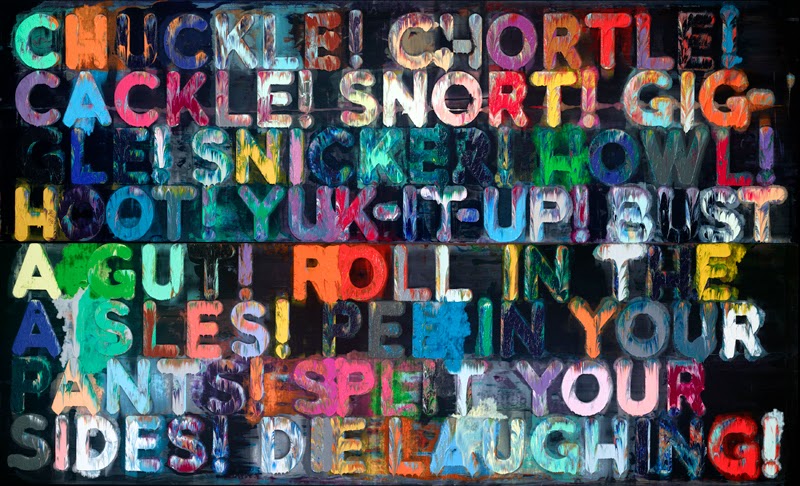 These shows both reach apparently painterly ends by ingenious mechanical means. Simon Lee has a good range (in colour, size, emotional content, and mood) of Mel Bochner’s long running series of Thesaurus paintings. All are on velvet, which Bochner says is the textile most able, unprimed, to hold up paint.  He puts large quantities into acetate templates of the phrases he has selected, then a hydraulic press is used to force it smeary-sculpturally onto the surface. Mark Hagen pushes black and white paint through rough burlap onto various textured surfaces such as packing tape and cut tiles, peels off the result, and reattaches it in reverse. The results are shown in customised frames and alongside modular sculptures, both of which take on rainbow colours from the anodisation of Diet Coke. The results, for both Bochner and Hagen, are much more alluring than the methods would lead you to expect. 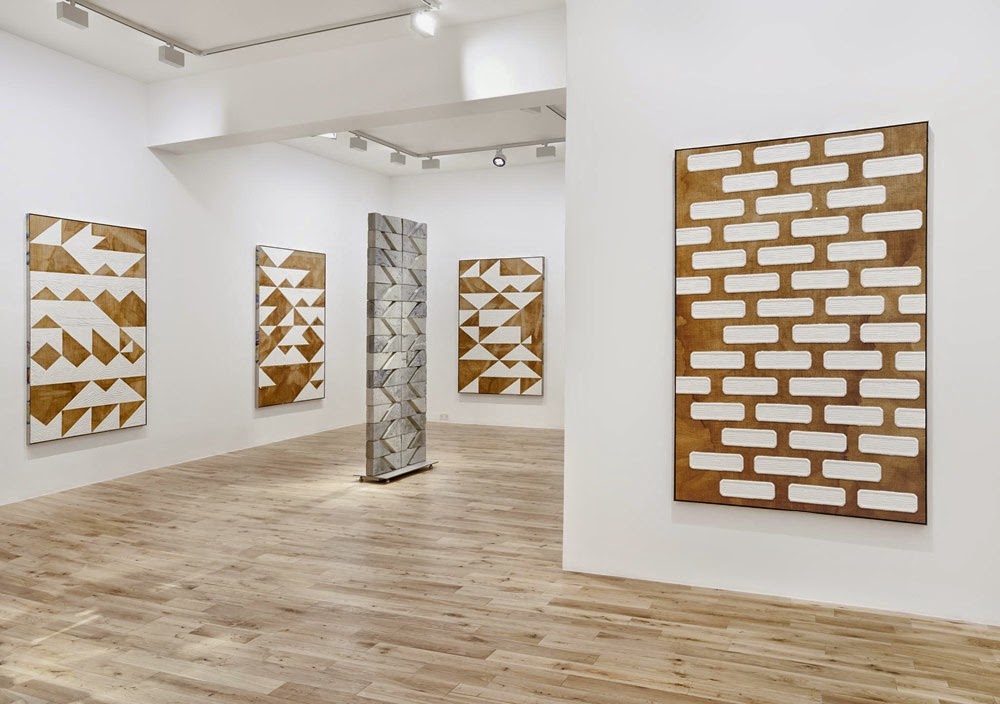 …and the stage darkens (or this voice is a big whale) @ Laure Genillard, 2 Hanway Place – Tottenham Court Rd 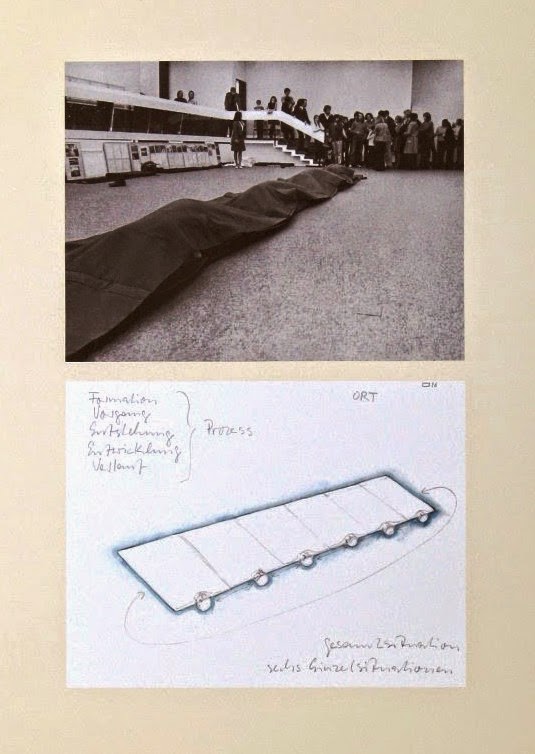 Seven artists on proprioception immediately sounds like a great idea to me. I’m not sure, having said that, this show delivers the premise – we’re never disoriented – but it is by turns seminal, funny and hypnotic. Seminal: a portfolio by Franz Erhard Walther, the 75 year old German who preceded Franz West and Bruce Nauman into the body zone. Funny: Ryan Gander sets a lion to play  in an open cube by Sol Lewitt; Laure Provost installs a video face down to the floor, and wishes in her OTT French accent that ‘the work was deeper’:.. Hypnotic: the way Haroon Mirza’s triple stack of would-be-banal videos of a Tesco filmed from a car at night  interact. A copper wire picks up the fluctuations in the lower scene, turns them into a fuzzing signal on screen two, which drives the flickering Tesco sign at the top. The off-kilter process put me in mind of the store’s profit mis-statements, but then I am an accountant. The title is from Peter Shaffer’s ‘Black Comedy’, in whihc the audience sees the actors when they act as in darkness, and is in total darkness when the actors can see… 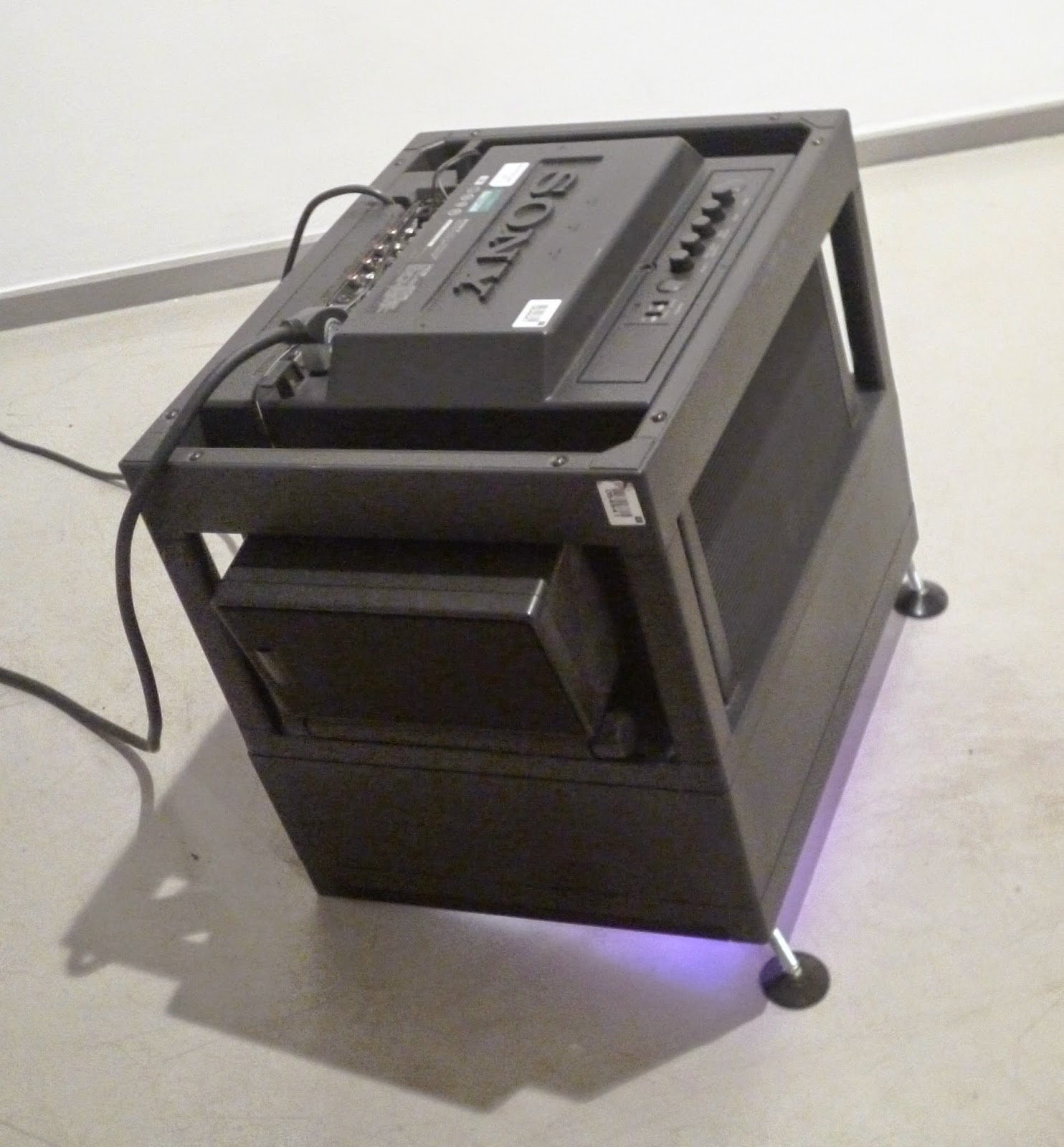 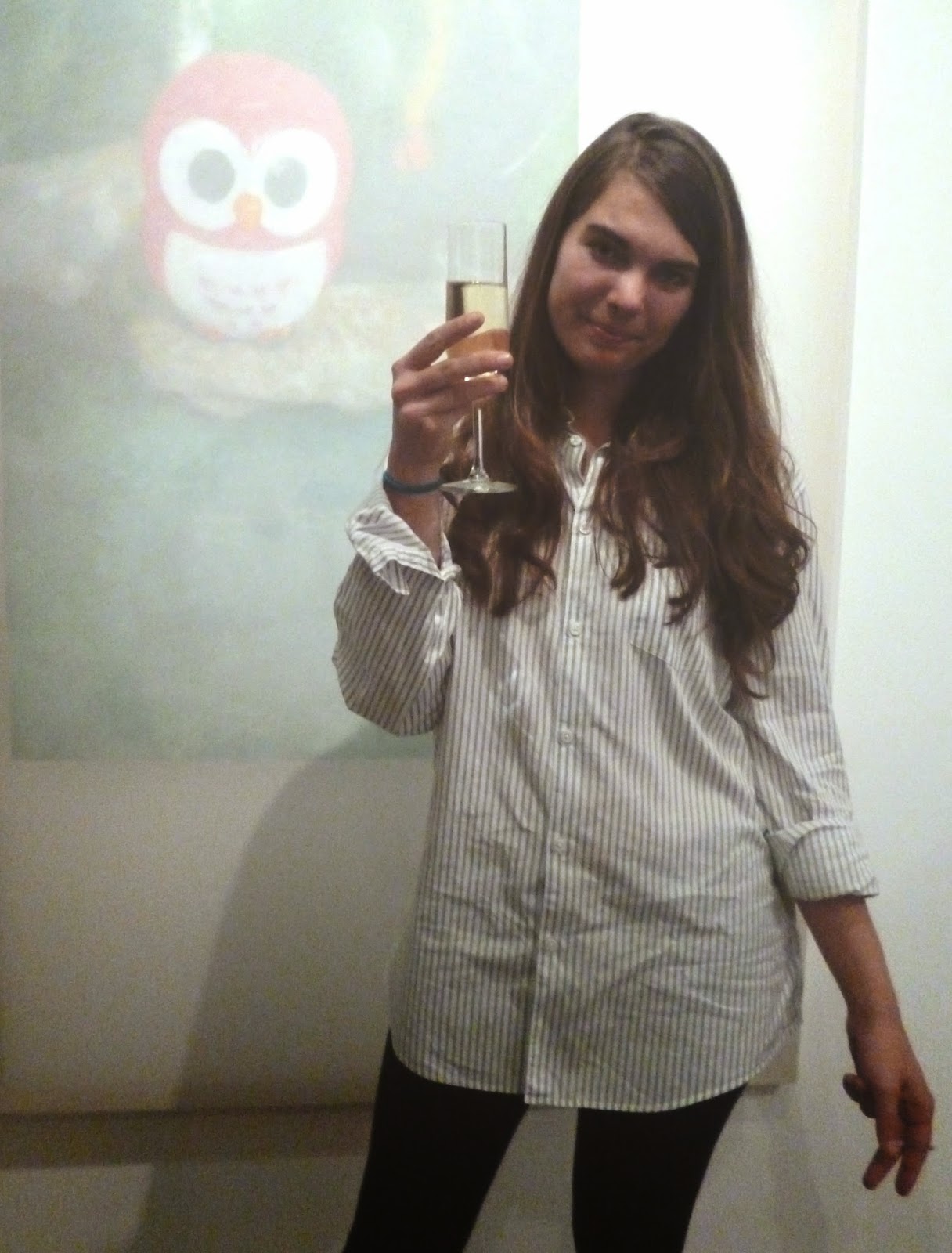 Martine Poppe at the private view
London-based Norwegian Martine Poppe disguises and half reveals  the object represented as the viewer moves around her paintings. Inspired during a Greek holiday by a list of imaginary phobias,  one being fear of ducks, Poppe has applied her method  to beach scenes in which she tracks between  the view as experienced, its photographic representation ( several complete with ‘bloopers’ such as her finger over the lens or her own shadow),  those photographs as the material for sculptures of boats,  and her painted version of the photographs. The results are satisfying both for the complexity of investigation of different levels of remove from reality, and for the what the press release calls  the ‘signature soft  opalescent fracture’ of the painted surfaces. 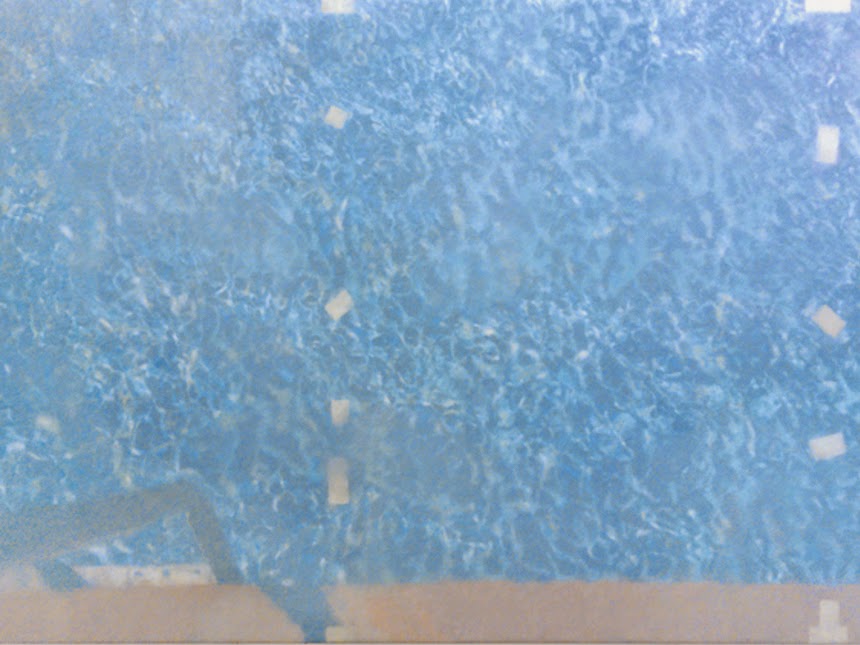 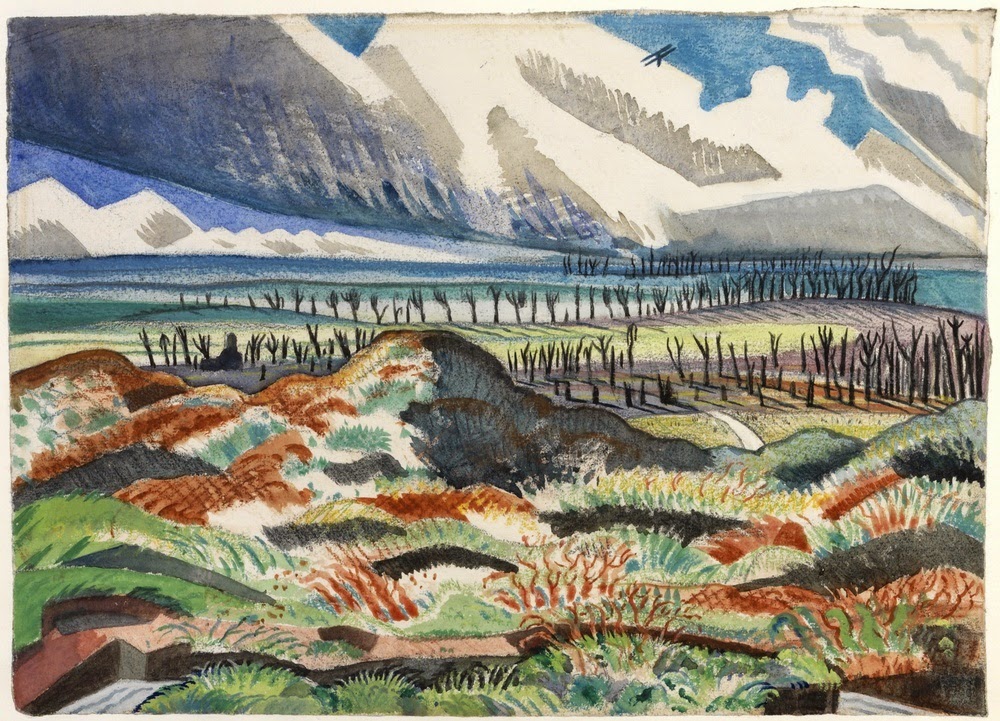 Ruined Country: Old Battlefield, Vimy, near La Folle Wood , 1917-18
Paul Nash has no rival as an artist who captured both world wars, and there’s no doubt about what his art owes to the experience of conflict.  Yet the landscape, modernised and psychologised (wounded ground, erotic trees) is what drives Nash’s uniquely persuasive combination of English and modern, and what better way to show that than through the immediacy of his watercolours?  Piano Nobile has somehow gathered 35 of the highest quality, and commissioned David Boyd Hancock to write the exemplary catalogue. Quite possibly the best value show in London: £50,000 would secure you what I suspect is the passing fad of a David Ostrowski, or the perky ambiguities of ‘Comment on Leda’, 1935… 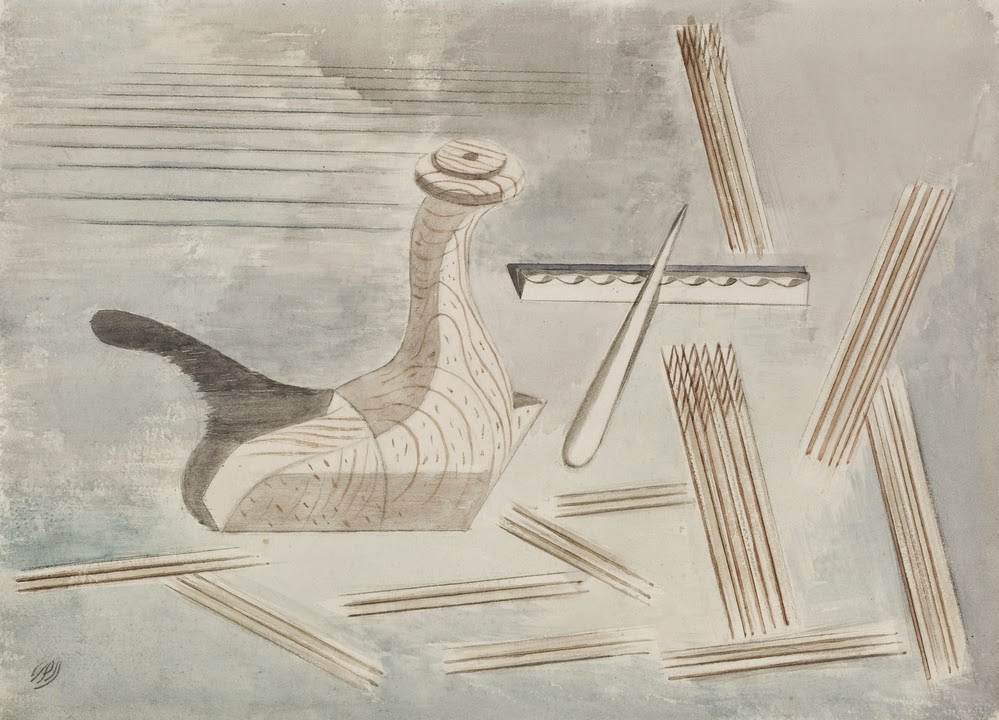 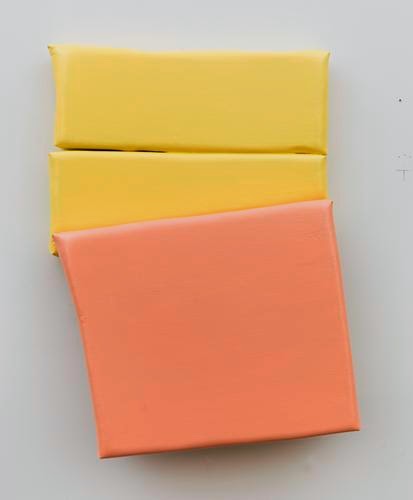 Bellini, 2014  oil enamel and spray paint on ester foam and canvas
American artist Justin Adian’s  first UK exhibition is in line with current trends in deconstructing painting (yet again! – see, e.g. the 12 strong ‘Beware Wet Paint!’ at the ICA). His bulging, shaped, glossy canvases – often combines – go halfway to sculpture in their anti-traditional form. Add in his titles, though, and they turn out to have more figurative origins than you’d have thought,  pricking the seriousness with which, say, Mondrian and Malevich are regarded. ‘Bikini’, ‘Baffle’ and the creased but intact ‘Never Break’ are among the knock-about titles. The jokes are consistent with the material: the canvas is wrapped around the sort of foam in which paintings are normally transported – so they are in a way the packaging of art moved inside to masquerade as art. 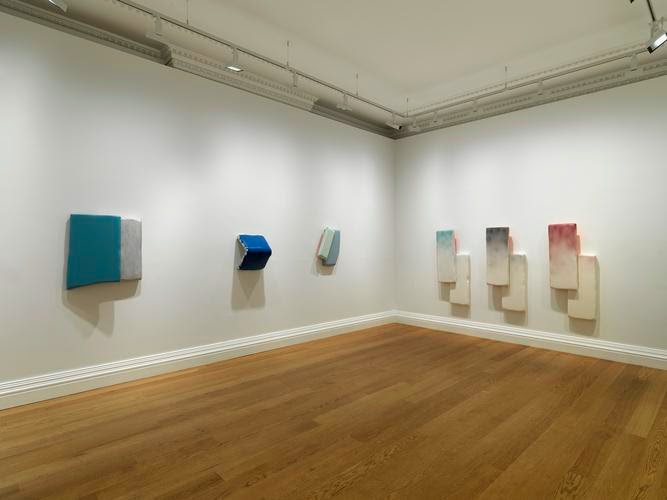 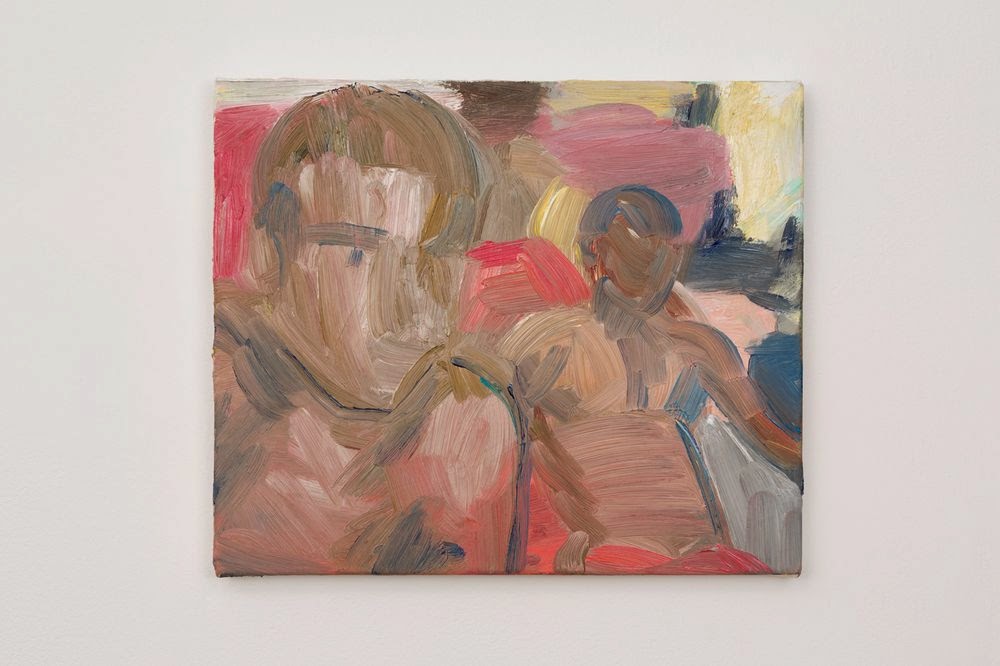 Aldo and Jesi, Albania, 16th-august 2014 Celia Hempton has made a splash with a colourful and intimate paintings of those close to her. This new stream of work complements that by depicting ‘live’ 40 contrastingly anonymous subjects taken from her own interactions on the Internet site Chat Random. These reverse the usual power relationship between artist and model, as the model can terminate the process at any point. Sized to her computer screen, they are all male and often sexual – that’s the nature of the site – and she’s forced to work fast, faced by the chance aspect of when she will have to consider the painting finished. That helps energise and vary the resulting combination of digital and painterly worlds. 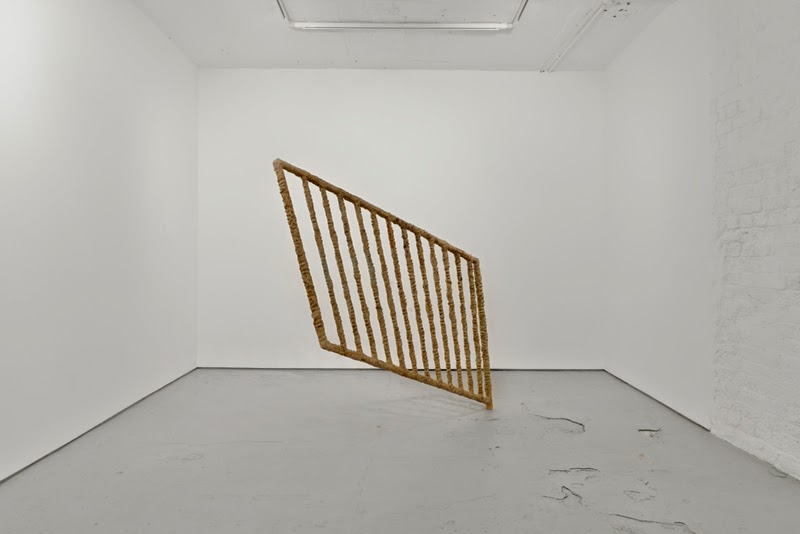 Kathleen Ryan’s glazed ceramic and epoxy putty over steel stair rail
Control Lapse consists of cast objects, the title indicating that the nine artists chosen – largely American – allow processes to develop their own logic. The standard is high: this is the first London show for Scott Niall Macdonald’s clinically surreal combinations of objects cast into white plaster purity. Ruairiadh O’Connell combines security railings with casts of net curtains caught up in them in a stand-off of privacies, linking neatly to Kathleen Ryan’s ceramic cast over a railing, which takes on an angularly animated pose. An obvious missing artist is Nika Neelova… But no problem: her latest castings, silicon rubber versions  of the packaging from her own discarded sculptures, so refocusing onto her own practice her way of trapping the past in the present, are one of several highlights in the excellent ‘Brand New Second Hand’ at Vigo. I could also mention Matthew Barney’s decidedly high end castings in zinc, gold and silver at Sadie Coles, which include examples of the ‘water casting’ process whereby molten metal is poured directly into water. 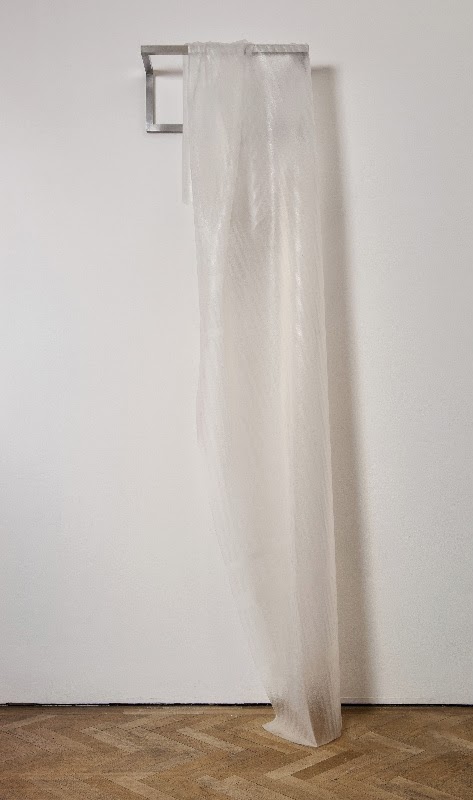 .
London is having a something of a Japanese moment:  Yoshimoto Nara at the Dairy and Shinro Ohtake at Parasol unit probably need little introduction, but there’s also Aiko Miyanaga at the newly opened Japanese-run White Rainbow, and,  at Berloni, the fruit of Carl Randall’s ten years of living in Tokyo. 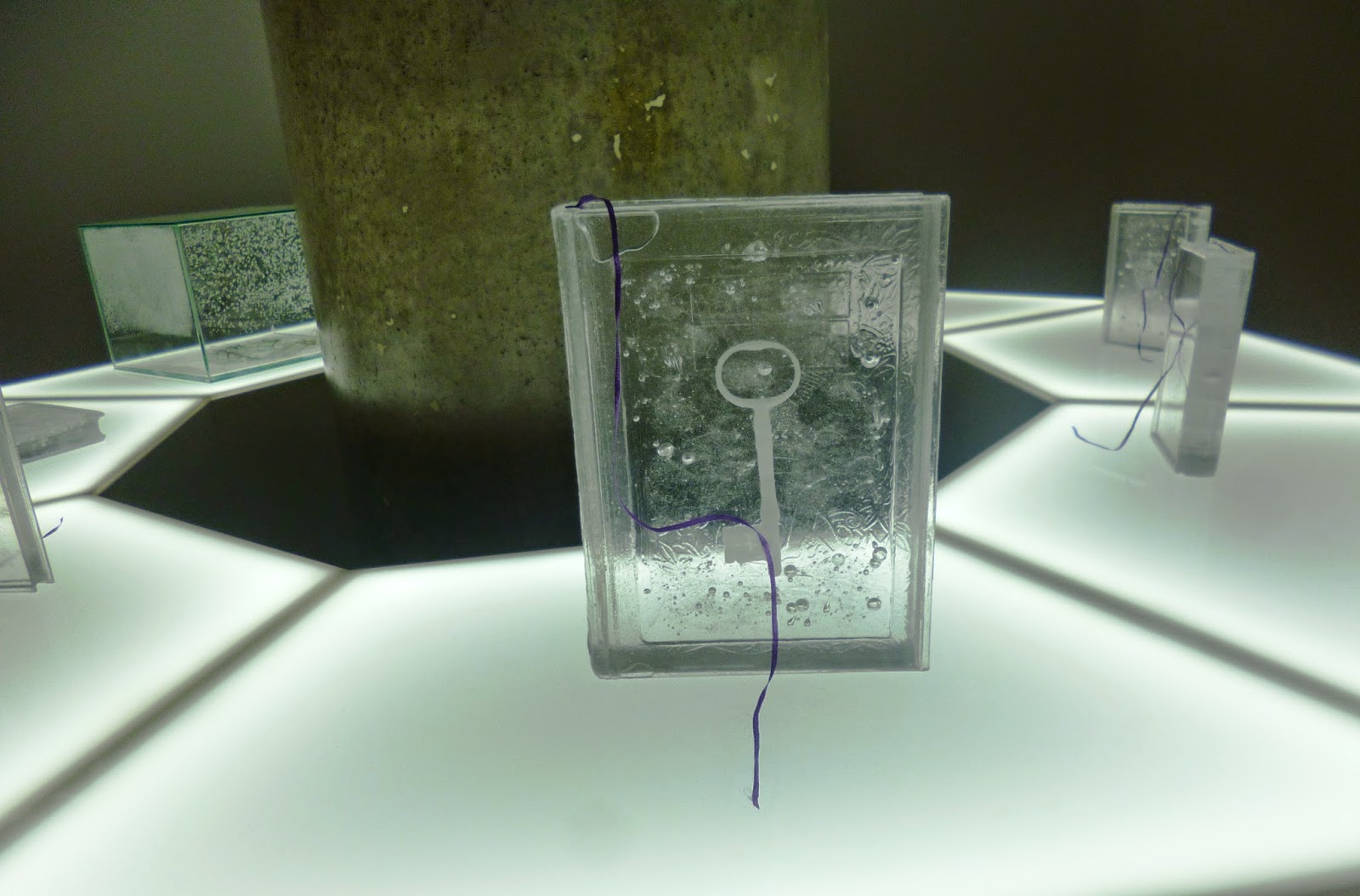 AIko Miyanaga’s interest in origins, in whether one can pin down the decisive moment at which one thing becomes another, feeds into some gently impressive work for White Rainbow’s inaugural show. Items – notably keys set to unlock the knowledge in resin books – are cast in the volatile compound of naphthalene, better known from moth balls, which evaporates and resolidifies according to conditions. That leads to frost the glass of enclosed items. In the back room is a subtle in which you can – no, really – hear the sound of ceramic pots. 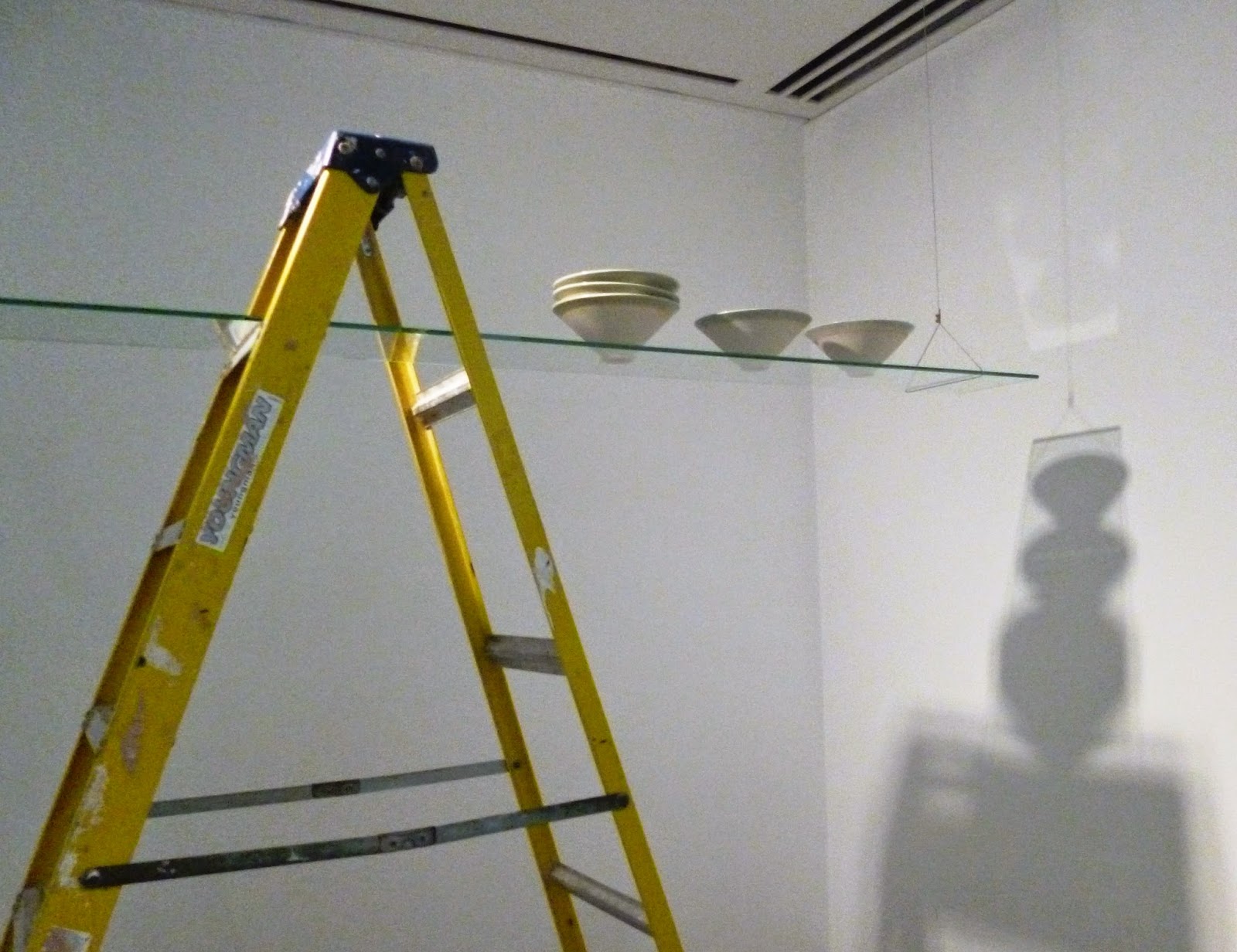 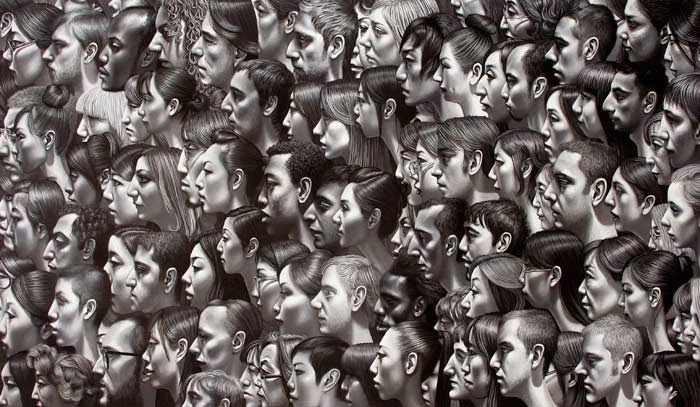 Tokyo Portrait 2, 2011 Carl Randall’s practice all stems from observation of people, but leads to very varied results from individual portraits (sometimes knowingly kitsch) to orientally-styled ink drawings to storyboard triptychs putting faces into their life contexts to the combination of many individuals into serried and meticulous multi-portraits which suggest isolation in the midst of overcrowding. Those last are Randall’s signature and strongest works, along with a grid of 68 instant hand-sized sketches by which he notes characters seen on the underground. 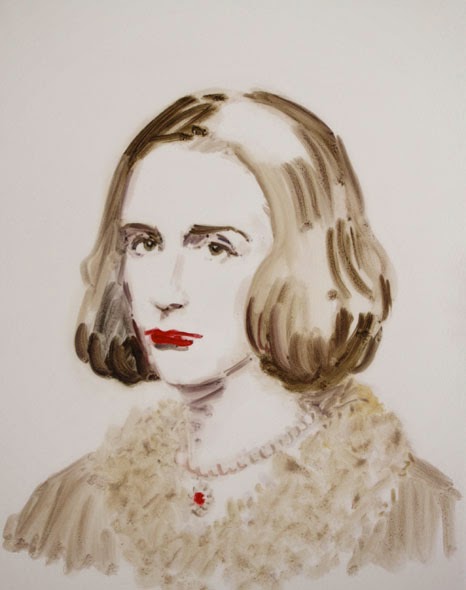 Annie Kevans: Marcel Duchamp as Rrose Selavy, 2014
The oldest commercial Gallery space in London commemorates 100 years since Duchamp’s first  ready-made with a riot of a show: over 50 artists on all five floors provide thoughts on the great enigma as well as work inspired by him, plus you can take a knockabout guided headset tour of the building’s history. It’s uneven, but all entertaining, and among the many highlights are Juliette Losq’s take on Étant donnés, Alistair Mackie’s forest and cuttlebones, Alex Seton’s marble Glory Hole and Cedric Chritsie’s branding of  the stairwells. Among the artists’ comments  I was struck by David Mach (‘Duchamp didn’t just move the goalposts, he obliterated the pitch’) and David Shrigley quoting Bruce McLean: ‘all the best artists piss about. Duchamp was brilliant at pissing about.’ 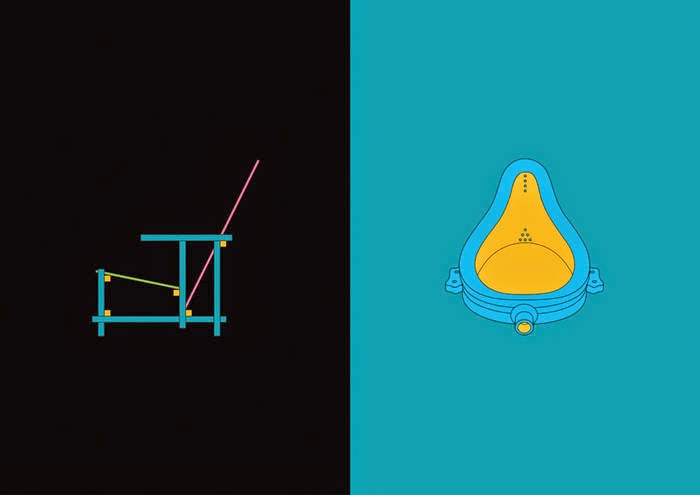 There are four reasons to visit Charlotte Road now. On one side, John McAllister’s hotly-coloured paintings play with pattern, borders and pictures within pictures as he luxuriates in gardens like an American Bonnard (it’s also worth checking the prints and collage downstairs). On the other, husband and wife Ori Gersht and Nogah Engler team up to turn buttterflies into Venetian masks in a wing-light adjunct to their separate practices – as well as showing her painterly fracturing of memory in landscape, his photographic fragmentation of apparent flowers in mirrors. 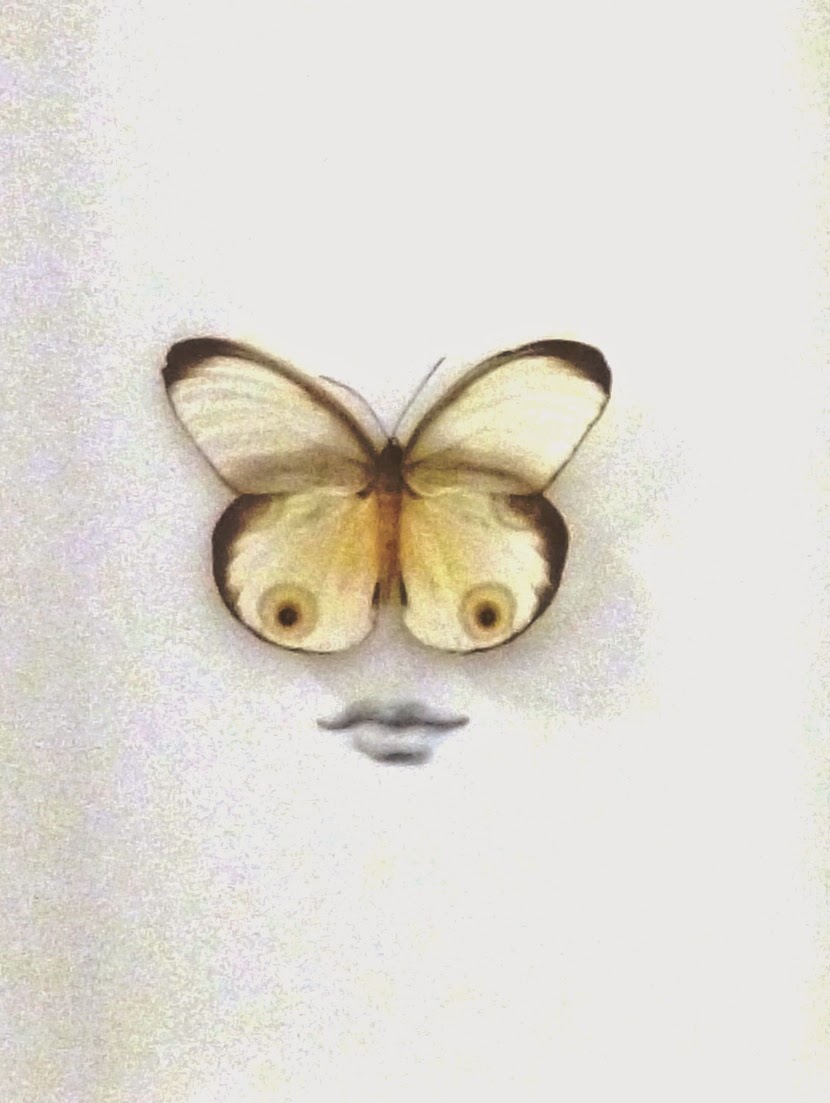