Alex Katz at the Guggenheim Museum

Decades ago, when I lived in Soho, a familiar sight was the sweatshirt-hooded Alex Katz on his daily early morning jog. Running into his wife, the beautiful Ada Katz, was always a pleasure – her warm smile exuded genuine charm. When interviewing the artist in his corner loft, where he has lived for decades, I was awed by his steadfast creative dedication. I knew the Katz family because of their son, poet, translator and critic, Vincent Katz. 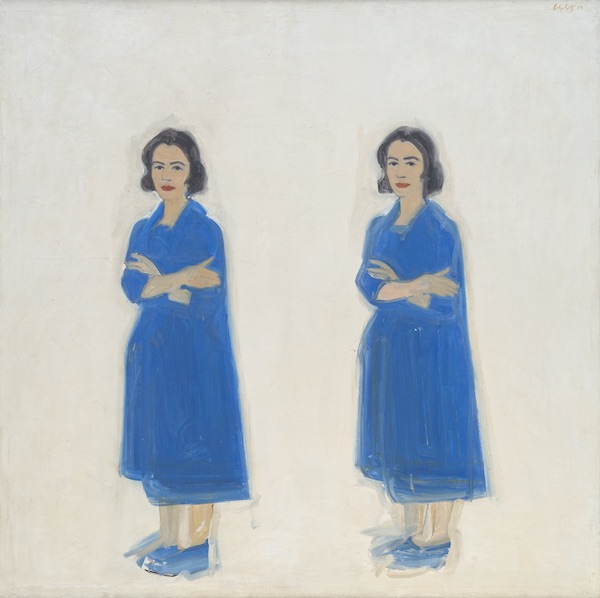 The New York born and bred nonagenarian is the current Art King of NYC, the entire museum giving him an ovation upon opening night. Celebrating his long, prolific career as a New York School painter, the museum is taken over by 154 of his distinctive realist works. The show opened with early paintings when Katz began studying at Cooper Union. As the viewer traverses the Guggenheim spirals, the size increase, images flatten and the palette alternately brightens and darkens.

Katz’s muse, his wife, Ada del Moro, may be the most painted woman go her time. Iconic images of Ada, like the 1960 “Black Dress”, show her in a chic black shift in six different poses. “Ada and Vincent” (1967) is a double portrait of a mother and young son sharing the same unswerving gaze.

Katz, who has said, “You have to trust yourself, or you fall into convention”, trusted his vision throughout the rise of Abstraction, Minimalism and Pop – while transmuting contemporary movements into his evolving work. Cityscapes, landscapes, night skies, and a roster of counter-cultural icons reflect an urbane life.

The finale of “Gathering” is large and recently completed nature studies. The Zen-like calm of these works are an eloquent conclusion to a breathtaking, career-defining retrospective. 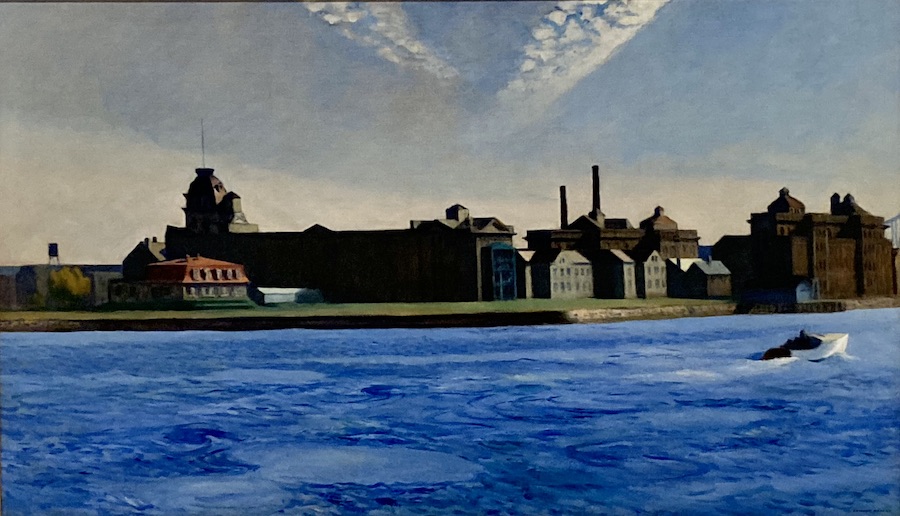 Long-time Greenwich Village resident Edward Hopper first showed up at the Whitney in 1920. The museum owns the most extensive collection of the iconic artist’s work, donated by his wife, Josephine Nivison. The 200 pieces in the show are displayed thematically and provide an intimate, contemplative vision of the city. Hopper lived in NYC from 1908 until his death in 1967 and was known for depicting urban alienation. Legendary images, like “Early Sunday Morning”, are a timeless ode to the city. Even the section “Theater” depicts poignant visions of patrons in luxuriously gilded red velvet interiors, communicating a moment of solitude in a bustling environment.

Downtown rooftops, storefronts, subway scenes and luncheonettes are among the images that provide alternative urban visions. Many images of his artist wife (and his sole female model) Jo Nivison, depict a romantic mystery. Hopper’s almost cinematic scenes include illuminated windows set against dark urban nights or trios of people seemingly unaware of each other’s presence.

Hopper began his career as an illustrator, and I loved his quick black-and-white sketches of vintage city life. Ephemera includes handwritten journals, early gallery announcements and photos. A dedicated urban walker, Edward Hopper’s paintings offer a provocative ramble through the city that inspired him. 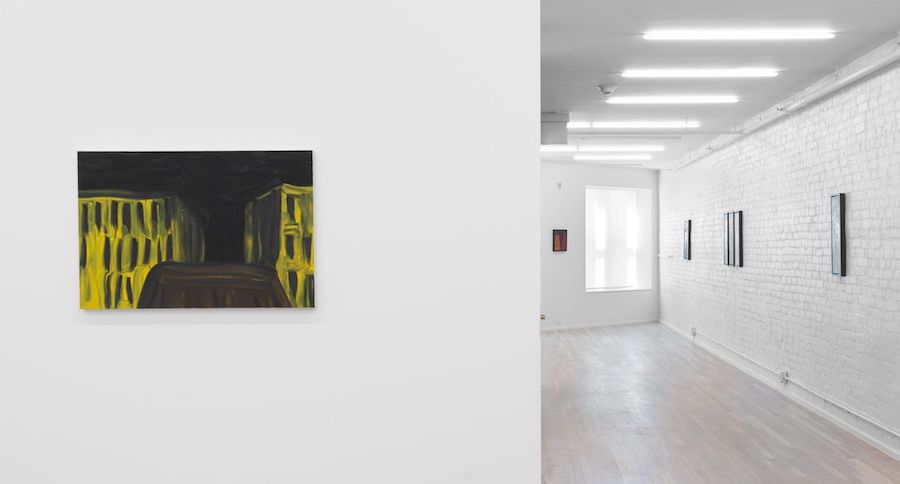 Magenta Plains has moved to an expansive three-story building replete with a rare terrace. The intergenerational dialogue between Martha Diamond’s cityscapes and Alex Kwatler’s cosmos presents interesting contrasts and possibilities.

My dear friend Martha Diamond’s small masterpieces are on view and seem as fresh and potent as decades ago when she first painted them. Another consummate city painter, Diamond drew her inspiration from urban architecture, transforming buildings into gesturally rendered facades. A bold and quirky palette and her abstract vision make Diamond’s work deeply appreciated by fellow painters. Magenta has been instrumental in reviving Diamond’s career. Recent shows include: Exhibitions curated by Alex Katz at Peter Freeman Skarstedt is curated by David Salle A group show at Karma. Her wet-on-wet technique and singular and supreme gaze make Martha Diamond one of her generation’s great artists. 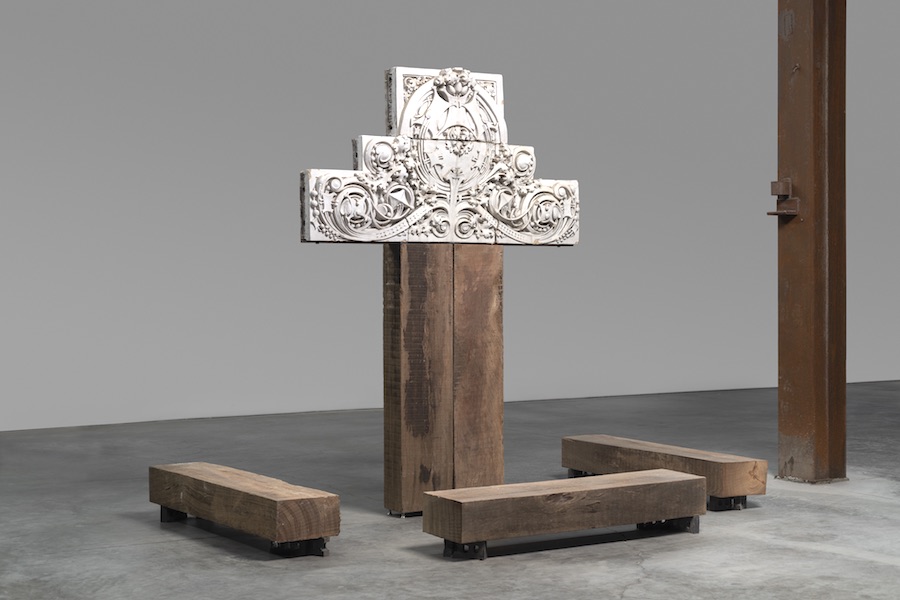 Theaster Gates  – Young Lords and Their Traces at the New Museum

The reason for this delayed review was my well-worth-it wait for the Theaster Gates “Young Lords show at the New Museum, which opened today. I first saw a big exhibition of Gates in 2018 at Milan’s Prada Foundation, and I loved his use of discarded material to evoke memory and archive inspiration. Like the Milan show, Gates presents sculpture, paintings, installation, music and performance in this survey show which Massimiliano Gioni, one of the curators and New Museum director, calls an “introspective rather than a retrospective.”

Theatster Gates is a dynamic creator of urban community building in his native Southside Chicago, creating architectural spaces and sculptures out of unused buildings. This same poetic political aesthetic animates this current show.

Like other one-person shows, three floors of the museum are dedicated to Gates, a trained potter and musician. The New Museum show is divided into three thematic floors. The films and installations are animated by what Gates says: “a clear citation of people who have moved me – writers, artists, family. Art is about the deep belief in humanity to make each other better.”

The top floor of the New Museum features many crosses made from old-growth pine. Gates says, “crosses that move back and forth between spiritual redemption and the cloak of oppression”, and his ponderous crosses suggest deep and uncharted possibilities.

As a profoundly amateur potter, I adored his selection of glazed stoneware pots, often with elegantly decorated long necks or primal bodies. Several sculptures include “Elegua in Water”, a stoneware figure adorned in fur pelts. Another floor is dedicated to paintings, drawings and ephemera, including a rare ceramic storage jar made by David Drake, the enslaved South Carolina potter whose work is now on view in the Metropolitan Museum.

And after the experience of world-class art in world-class venues, it was energizing to check out two shows fueled by transgressive vision and decidedly non-capitalistic curation. 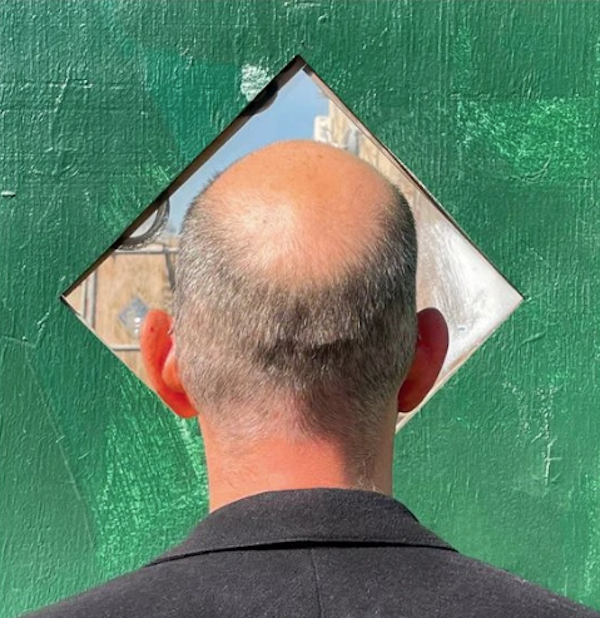 Large multi-panel depictions of constellations are paired with small eclipse paintings. Kwartler paints on quotidian construction plywood, sometimes with geometric cutouts and then renders constellation maps embedded with coins, tin cans and over-the-counter medicine tablets. The large transformative canvases are juxtaposed with the ambient glow of the diamond-shaped eclipses.

Graffiti legend Quinones named his piece “Soylent Green’ and painted it on a maze of computer motherboards. Raymond Pettibon’s iconic cartoon-influenced pieces combine his signature painting and text. In these charged political times, Stefan Bondell’s “No Exceptions” addresses the precarious abortion rights struggle in a densely marked chiaroscuro canvas. British-born Jamie Nares shows one of his signature pieces with a large brushstroke that appears to dance across the canvas. Finally, John Newsom’s majestic tiger mesmerizes the artist’s alchemy of abstraction and figuration.

Freed from the confines of establishment gallery spaces, The Trops integrates street and stratified culture, creativity and community. From lower east side outdoor exhibition spaces to bringing art to bodegas, laundromats, and galleries in Brooklyn’s Fort Greene, Librizzi and Tofaghi are cool and contemporary curators of art that represent New York City’s current moment.

This lively group show features over forty international artists reacting to the political state of America. For twenty-four years, White Box has presented art addressing community and freedom of expression. Their current East Village location continues the mission of social justice and influential art. Ballots Not Bullets opened in time for the midterm elections and featured a lively performance on Election Eve. Great opportunity to gather with like-minded citizens in these politically precarious times.

Exhibiting artists include Joseph Kosuth, Eteri Chkadua, Luigi Cazzaniga, Jenny Holzer and a score of other visionary creators. Founder and director Juan Puntes combine a passion for Avant grade art imbued with humanism and compassion. The Lower East Side is lucky to have a new outpost for creative culture.