As the nation plunges towards Brexit, and, as the official galleries – specifically the two big London Tates – grow more and more self-satisfied and increasingly inclined to offer displays of civic virtue as substitutes for anything you can actually describe as art, one turns towards the commercial galleries for solace.

The most attractive show I’ve seen recently at one of these is at the Gazelli Art House in Dover Street, (Top Photo) which is a handsome gallery on two floors, with its ownership rooted (of all places) in Baku. The exhibition is called Multiverse and runs till 11th January, so there is time to see it. The handout describes it as the gallery’s “first group show devoted entirely to painting” – something that seems strange, given the handsome, beautifully lit spaces available. The three artists whose work is on view belong to different generations. Christopher Battye was born in 1942. He’s been around, ad making art, for a long time, but Multiverse is his first exhibition in fifteen years.

Francesca Blomfield (b. 1990) and Dustin Pevey (b. 1980) are much younger. Two of the artists are British and live here. Pevey is American, and lives and work in New York, The only thing that unites them seems to be the fact that the gallery management likes their work. Battye, so the hand out tells one, has links to a now vanishing Bohemian culture – “the restaurants and drinking holes of Soho and Chelsea. He produces pictures with vestiges of Surrealism and a strong narrative punch. A big one has a long narrative title: ‘Man in owl mask presents theatre of the living dead, featuring murder of dead crows’. It was painted as long ago as 1998 when the now almost-vanished YBAs were still young and in power. Of their influence, it offers not a trace. Magritte might be its father, though certainly not its father. It does seem to introduce the viewer to a very personal imaginary world.

Pevey’s work is not unlike Battye’s, but perhaps with an element of Pop. A big difference, however, is that his paintings are almost (though not quite) in monochrome.

Francesca Blomfield’s work is much more densely worked, usually smaller, and often there is an overlay of text – though not, I suspect, text that you are actually supposed to read.

If the three artists have anything at all in common, it is the distant, but still perceptible echo of Surrealism. Nevertheless, the combination of these three talents makes a nice show. 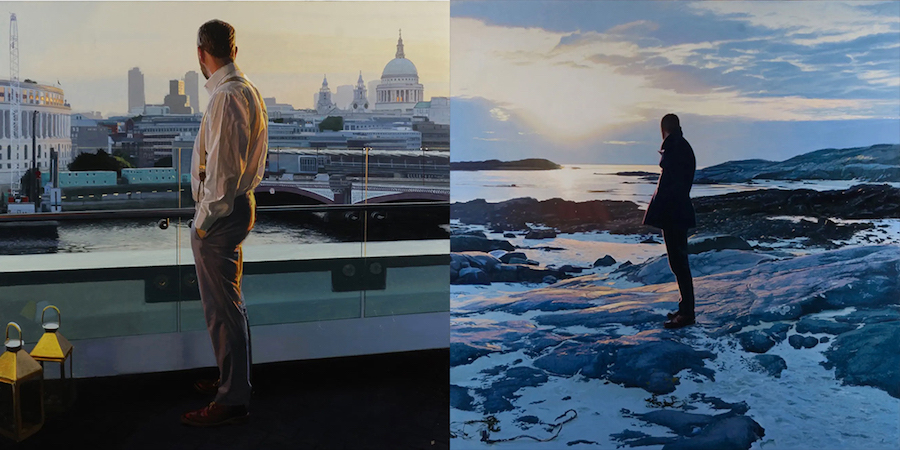 At the Pontone Gallery in Chelsea (till 8th December), there is a show that looks back to the gallery’s previous incarnation, when it was the Albemarle Gallery in Mayfair. The artists are a mixture of nationalities – British, Spanish and Korean. The art world in South Korea is one with which this gallery has a strong connection. The emphasis is largely on figurative art, and on realism. A familiar name is that of the Scottish painter Iain Faulkner, who paints photorealist scenes suffused with melancholy. There are two nice examples here – scenes with smart sportscars and young men with their backs turned to you, looking towards a skyscape from which the light is gradually fading.

The most unexpected images are by the Korean Do Min, who paintings are supposedly about dice – yes, the dice you roll when you are gambling. The most impressive composition, however, shows a kind of hybrid monster constructed from large masks, with a pair of lighted candles in place of ears, stuck to either side of its head. The title in The Boundaries of Fantasy – but that is also given to two other compositions where big dice are indeed visible. 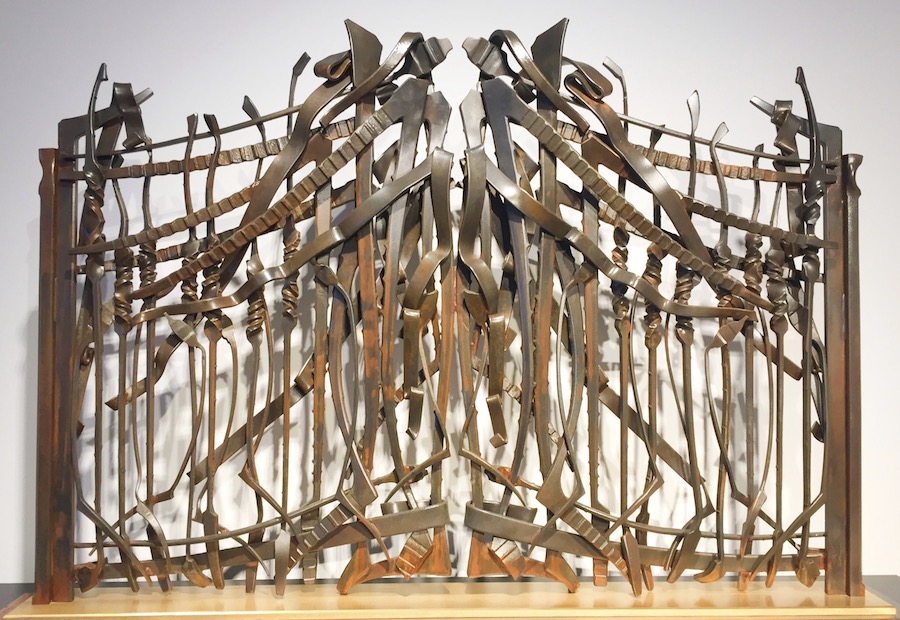 A third show I’d like to recommend is one of drawings and sculpture by Albert Paley, now at Messums in Cork Street, which runs until 30th November. I need to signal a personal interest here – in the fairly dim long ago I wrote a monograph about Paley, who is one of the most distinguished architectural sculptors living and work in the USA. By ‘architectural’ I mean that he makes work, often on a very ambitious scale, that relates to or actually forms part of buildings. This is a modest show, with more drawings than sculpture. What sculptures there are, are not on a large scale. They are maquettes for much bigger things, or art art-and-craft objects – for instance, pairs of elaborate candlesticks. Paley is pre-eminently a metalsmith and things like his Memphis Gate Model spring as much from long-standing craft traditions as they do from those of contemporary sculpture as we now know it. He did, in fact, begin his career as a maker of jewellery – a paradox, when one considers how huge some of his more recent work has been. What one gets at Messum’s is a very small, though also intriguing, taste of a mighty career that has taken place elsewhere.