It’s been a fantastic run of accolades for the Turner Prize-winning artist Lubaina Himid CBE who has been elected as a Royal Academician in the category of Painting at The Royal Academy of Arts.

The architectural partnership of Adam Caruso and Peter St John, founders of Caruso St John Architects, as a Royal Academician in the category of Architecture, following a recent General Assembly. In addition, Professor Roger Kneebone has been elected as the new Professor of Anatomy and Lord Peter Ricketts as Secretary for Foreign Correspondence.

Lubaina Himid (born 1954, Zanzibar, Tanzania) is a British contemporary artist, curator and Professor of Contemporary Art at the University of Central Lancashire in the north-west of England. Himid’s paintings and installations explore ideas around black British representation and identity. She was one of the pioneers of the Black Art movement in the 1980s which offered a forum for black artists exploring the social and political issues surrounding black history and identity. 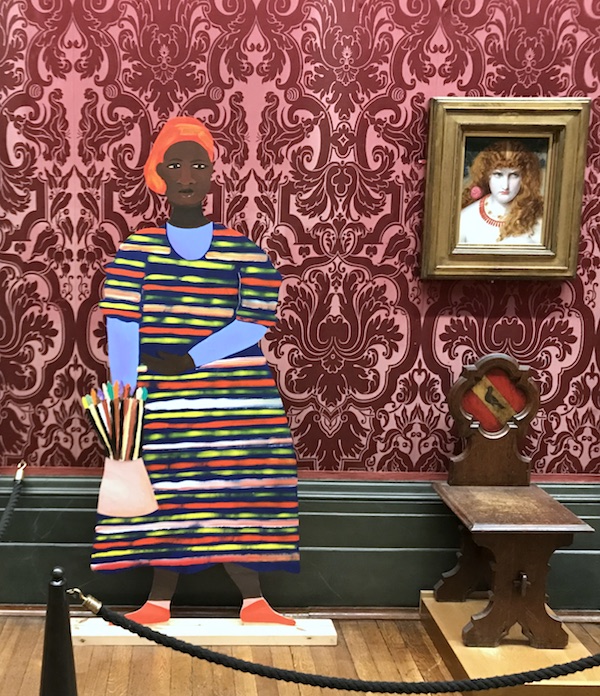 Though Himid is known as a painter, her work also engages with museum collections in which she creatively interrogates the history and representation of the African diaspora and looks at the role of museums within cultural histories. Alongside her artistic practice, Himid has curated exhibitions to showcase underrepresented Black artists. As an artist, advocate and curator she has facilitated and celebrated the role of Black artists and their contributions to contemporary society. Recent solo exhibitions include Modern Art Oxford, Oxford (both 2017), Navigation Charts, Spike Island, Bristol and Invisible Strategies,

Adam Caruso and Peter St John – Caruso St John Architects Category of membership: Architect In 2016 the Royal Academy amended their Laws to allow a collaboration of two or more Artists orArchitects to be elected. Adam Caruso and Peter St John established their practice in 1990. Caruso St John Architects has offices in London and Zurich, undertaking projects that range in scale from major urban developments and cultural projects to intricate interventions in complex historical settings.

The practice first rose to prominence after winning the competition for the New Art Gallery Walsall and is known for its museum and gallery projects and frequent collaborations with artists. Its projects include the redevelopment of Tate Britain, Nottingham Contemporary and the V&A Museum of Childhood, as well as a series of galleries for Gagosian. In 2016, the practice was awarded the RIBA Stirling Prize, for the Newport Street Gallery in South London. In 2018, Caruso St John Architects, working in collaboration with the artist Marcus Taylor, was selected to curate the British Pavilion at the 16th International Architecture Exhibition – La Biennale di Venezia.

Alongside its cultural work, the practice has assembled a portfolio of substantial urban projects throughout Europe. Recently completed buildings include a new headquarters for the Bremer Landesbank on Bremen’s historic Domshof and the Lycée Hôtelier de Lille, a hospitality school and urban regeneration project that is built within monumental former industrial buildings to the east of the city centre. The practice is currently developing designs for major projects in London, Antwerp, Cologne, Hamburg, Munich, Stockholm and Zurich.

The practice’s work is wide-ranging, and it regularly undertakes small projects in special situations. Recent projects include exhibition furniture for Sir John Soane’s Museum, the refurbishment of the chancel at St. Gallen Cathedral in Switzerland and a new organ loft for Canterbury Cathedral.

The position of Professor of Anatomy complements other Professorships at the Royal Academy Schools including Architecture, Chemistry, Computer Vision, Drawing, Painting, Perspective and Sculpture. He succeeds the RA’s longest-serving Professor of Anatomy, Gerald Libby, who this year steps down from the post after 43 years. Lord Peter Ricketts Secretary for Foreign Correspondence Lord Peter Ricketts is a retired British public servant and now a Life Peer. As a British diplomat for over 40 years, he had postings in Singapore, Washington, Brussels and finished his career as Ambassador in Paris until 2016. Before that, he was the top civil servant at the Foreign Office from 2006-10 and then worked as the Prime Minister’s National Security Adviser 2010- 2012. He was appointed in 2016 a cross-bench (non-political) member of the House of Lords, where he pursues his interests in European and international security affairs. He is a Visiting Professor at King’s College London.

Lord Ricketts knows from his diplomatic experience how much Britain’s cultural institutions are respected around the world, and believes that they have a vital role to play in promoting cooperation and understanding between nations and cultures. He and his wife Suzanne are keenly interested in British and European painting. The Secretary for Foreign Correspondence is an honorary position within the Royal Academy and Lord Ricketts succeeds Lord Peter Carrington.

The Royal Academy of Arts was founded by King George III in 1768. It has a unique position in being an independent, privately funded institution led by eminent artists and architects.